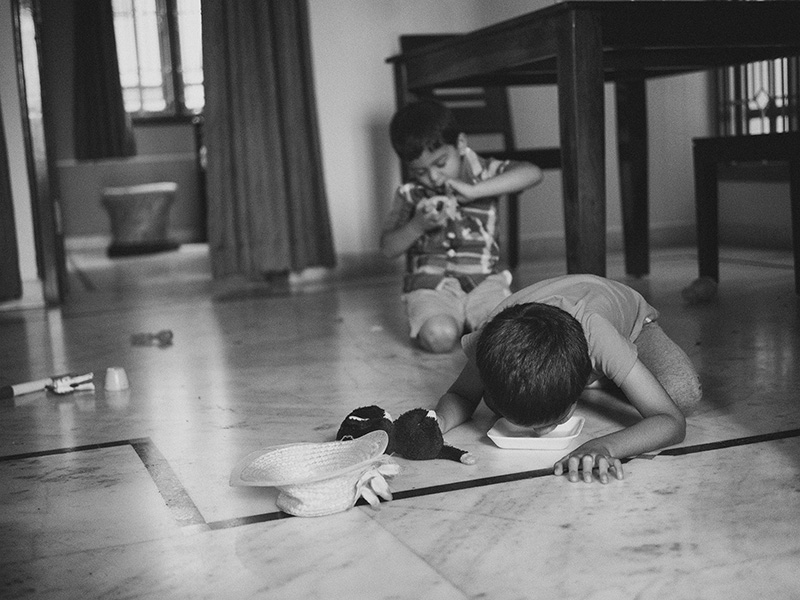 “Whisky, my name is Whisky!!”, she quipped and started licking the plate.

Our neighbour has a pup dog named Brandy and the tiny fellow has become the attention of all the kids in our area. They swarm around the pup, dote upon it and play with it a lot.

My daughter came to me and said she wanted one too. “Ok”, I said. “What shall we name the pup?”, she asked. “Theirs is Brandy, lets call ours Whisky”, I said.

A 1000 watt bulb flashed on her face. She doesn’t know what brandy and whisky mean, but I guess the name was catchy enough to get her excited. She pretended like a pup, calling herself Whisky and goofed around a bit, until a realisation hit her.

“Who will clean up the poop?”, she worryingly asked me a few moments later.

“Then I don’t want a puppy!”, she stated dismissively and went back to playing with Sahil who was lost in his own world of disfiguring another toy!

“Nann hesaru Basappa antha, illi thumba varushadindha iddinee (my name is Basappa, I’ve been here since many years)”, the Dasayya at the Kalyani (pond) in Melkote tells me, polishing his brass vessel with lemon. Every morning, he comes to the Kalyani near the temple and performs religious tasks for devotees at a small fee. His day starts early… applying the Vishnu nama on his forehead, polishing his brass vessel and plate, cleaning the shanka (conch) and jagate (stick to hit the plate)… and then approaching devotees offering his service.

Living this way is the only thing he knows. Clearly, life for this Dasayya revolves around the temple. Before I could ask him more questions, ‘clients’ arrive and I thank him for his time and leave.