I just realized its been exactly 10 years to the day since I first entered the stock market. Being risk averse and skeptical, I equated stock market to casinos and thought I’d never touch it with a long pole. Little did I know that a large part of my own life would be devoted to studying and investing in that very same treacherous market.

The date was May 17, 2004. A senior colleague looked very pale and I came to know that he had lost a lot of money that day in the crash. I was perplexed as to why people invested in risky things such as the stock market and vowed that I would do no such stupid thing.

I studied the market for a while and purchased my first stock on 24-Jan-2005. I have come a long way since :). 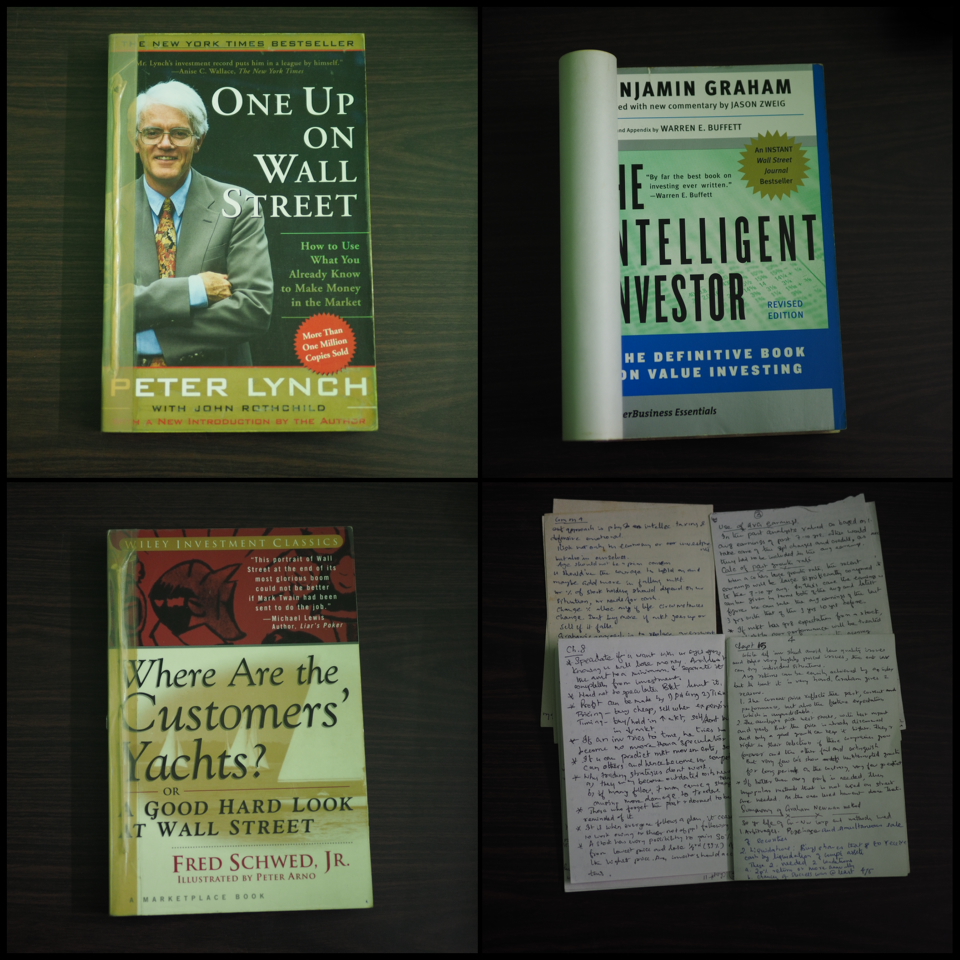 I think a lot of it is attributed to the 2 fantastic books I read early in my career, in 2004 and 2005, especially during my long cab / bus trips to office from North Bangalore to Electronic city. They are

“One up on Wall Street” is a fantastic *first* book to read on stock market investing and gave me a bit of confidence that I too could invest. It was simple enough for me to comprehend as well. I still think I wouldn’t have entered the stock market (at least not in 2005) had I not read this book first. I can’t even recall who recommended this book, but whoever that is, I am indebted to him deeply.

However, the other book, The intelligent investor, shook me up completely and took all that confidence away and made me question everything. It took me a painful 6 months to finish the book, but I kept at it – reading and taking notes on pieces of paper (see image) during my bus trips. I think this book scared me a lot that I didn’t do a lot of stupid things few of my friends / colleagues did – for that alone, this book is worth its weight in gold to me. Also, this book (along with One up on Wall Street) made me think of stocks as investment in “businesses”. The 3 main lessons in this book are as relevant as ever and will always be:

I think I was far too cautious in my early days. My idea was something like:

There was another book that had a deep impact on me in 2006 – and made me question few things and helped alter course a bit. That book was “Where are the customers’ yachts?”. It taught me an important lesson of not dancing to the tunes of the brokerages, analysts and salesmen and to attempt to have an independent opinion, no matter how amateurish that is. I value that a lot today.

There were a lot of other books I read, enjoyed and learned a lot from – but these 3 shaped me in the early days.

And then sometime in 2006, I came across this fellow named Warren Buffett (I guess on Rohit Chauhan’s blog). One thing led to another and I discovered Charlie Munger. I never thought I’d be so interested in business! I have been hooked ever since!

Looking back at the decade gone by, I think I escaped a lot of stupid things because I started out the right way and came out pretty okay. The results have been largely average (which could have been replicated by simply buying good mutual funds like Franklin Bluechip or HDFC Equity), except for 2 fantastic periods in 2009 and 2014 – making all the effort totally worthwhile. Looking back, I wouldn’t want to change anything – and I look forward to the next decade.

2 thoughts on “A decade of investing”