The kids of Vidyodaya sang the African greeting song and danced. We watched in merriment!

Riding through the forest:

Earlier in the day, Santosh had instructed all riders to ride in groups of 5. It was tusker territory.

We rode in groups. In our group were Sameer, Chiddu, Shilpa, Mayank, YVR Vijay, Manju,Priya and Pramod. The route was fabulous!

Heavenly, if I may add! 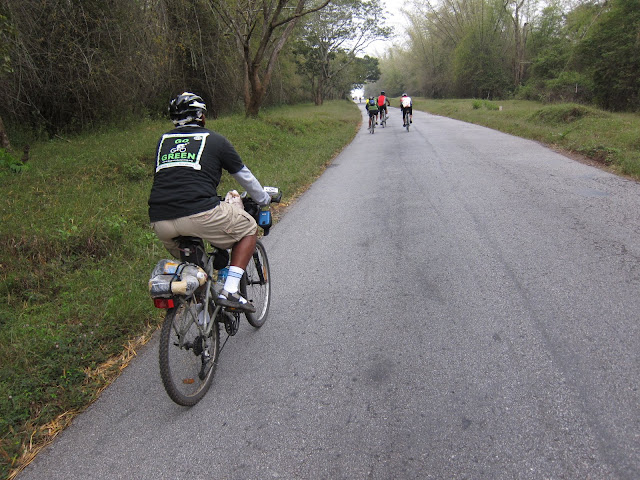 In no time, we were at the Tamilnadu border, where we cheerfully clicked pictures posing in front of the Mudumalai reserve entrance. 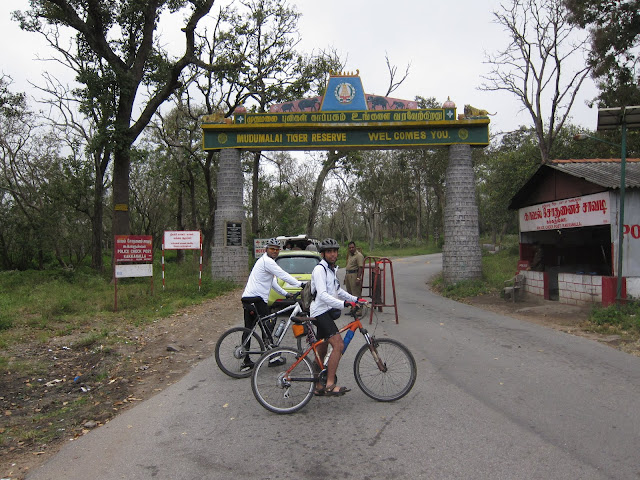 In front of Mudumalai entrance

We rode through the forest for 30kms before hitting support station 1 where we also had tea. We were looking forward to the giant of the day.. the 60km Ooty climb.

In addition, 10 of us had another plan too. To visit Vidyodaya, the school for Adivasi kids, on the way. 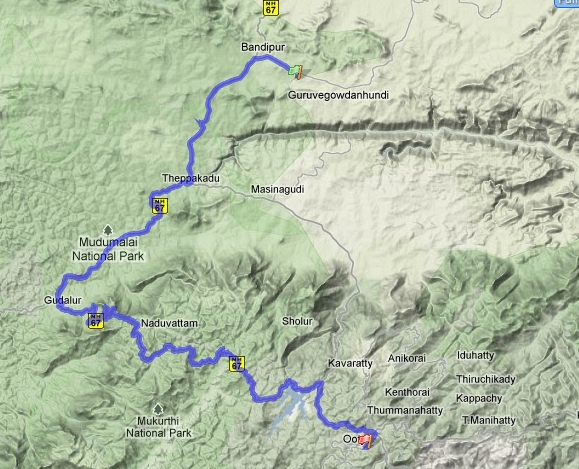 Sudarshan Krish had raised funds for Vidyodaya as a TFN charity rider and wanted the riders to pay a visit to the school. 9 of us cheerfully agreed. The others continued with their Ooty climb.

At the school, Mr Ramdas, Mr Sudarshan (the headmaster, not the TFNer) and the kids extended us a very warm welcome by singing, dancing and offering tea and food.

A quick introduction later, each kid tied a handmade bracelet to each rider. To me, that was the most touching moment of TFN! The kids sang more songs and danced to the tune. We had a great time with the kids there! 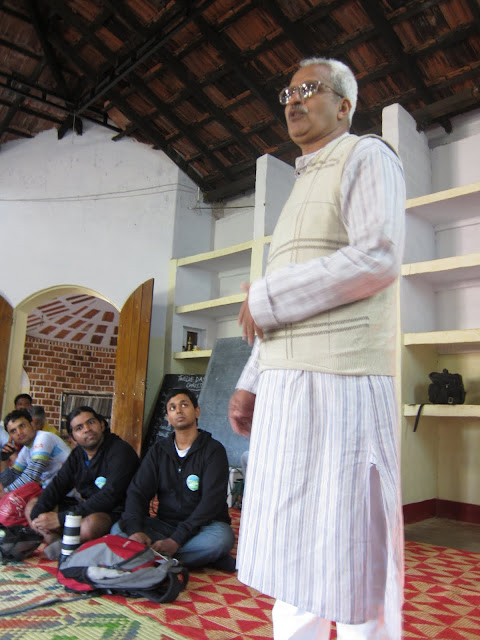 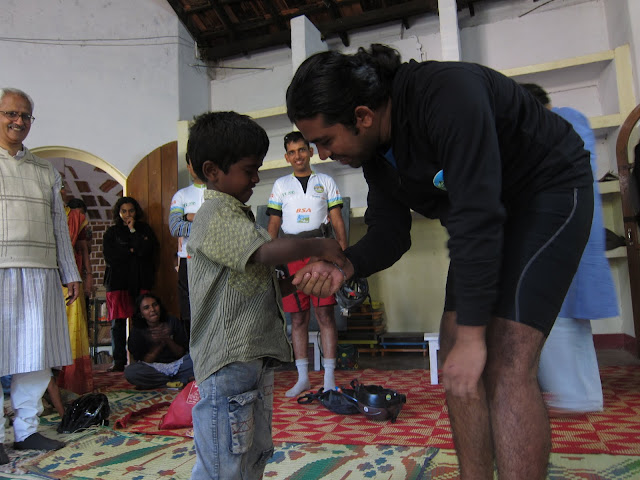 As Ketan tied the bracelet on my hand, I felt elated!!

While leaving, a few guys performed a bike salute to the kids who looked completely perplexed as to why we were lifting our bikes the way we did, but nevertheless were very amused :-). There was a special goodbye with music and dance for us.

Watch the video below.

We bid them goodbye and started our way back. Just then, Mr Ramdas told us about a short-cut that we could take instead of the long route back.

Little did we know that the short cut would be a steeeeeeeep uphill climb! It actually took us a good 20 minutes to pedal through it. Someone told me that the gradient was close to 30%. Front wheels were lifting off the ground, it was that steep!

Everyone gave up at the last 200m or so except Sameer who pedalled all the way up as if he were possessed! The regular route should have taken us much lesser time. :-). This 200m was the only portion of TFN that I pushed.

The time was 10.30 and we had spent more than 30 mins there as against the original plan of 10 mins. ‘Behind schedule’, Chiddu warned us!

The 16kms upto Naduvattam were steeper than the rest of the route.

Sameer rode upto me and said, ‘do you know Chinese hill?’

Having grown up in Nilgiris, I was rather reluctant in saying no. Ten thousand thundering typhoons! Where could that hell of a place be, I thought! Sameer only smiled back.

In another 10 minutes, we were at the Chinese hill. Heck, it was a small private property. Gladly, we did stop and rest there. Chinese hill, what the hell! Didn’t the guy get a better name? 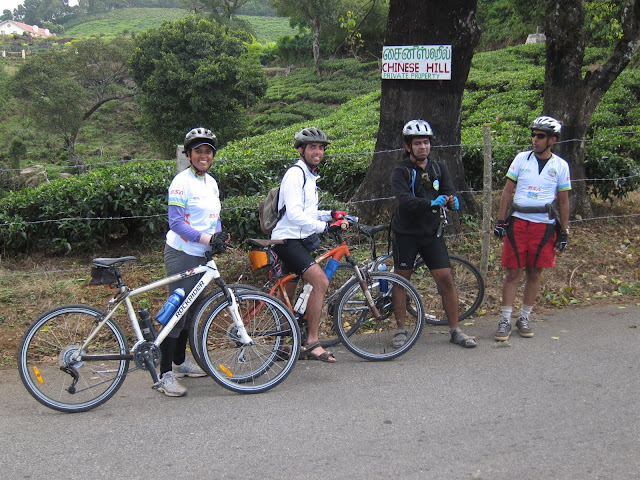 Chinese hill, what the hell!

And then came the Needle rock and then the Frog hill view point… portions leading upto them somewhat steep!

A local guy on a bike slowed down and asked me, ‘what will you do if it gets steeper?’.

‘We just keep pedalling’, I said.

‘What if it gets even more steeper?’, he asked again, somewhat surprised. I calmly quipped, ‘still we just keep pedalling’!

‘Special cycle, that’s why’, he muttered to the pillion rider and rode off. I wasn’t amused by his last statement, esp after having busted my ass and legs for all that distance!

After around 2 hours of pedalling, we were at Naduvattam. Thankfully SS2 was just 1 km away!

Sameer and gang had gone past us.

When we caught up with them 10 minutes later, we saw them happily gorging on egg rolls at a roadside eatery. Never one to let go off a chance to eat local food, Sameer had already downed a tea and an egg roll and was waiting for more! 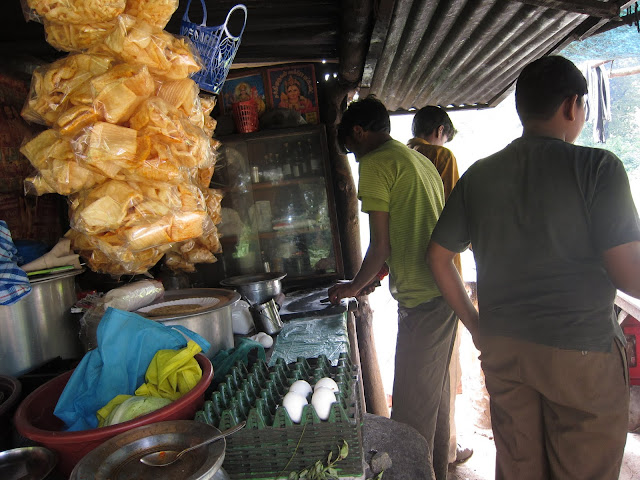 Happy to rest our feet, we too joined. 6 guys in all, we ransacked the place.

Ordered too many egg rolls and omlets, 27 eggs in all and the guy had to rush to a nearby place to purchase eggs!! 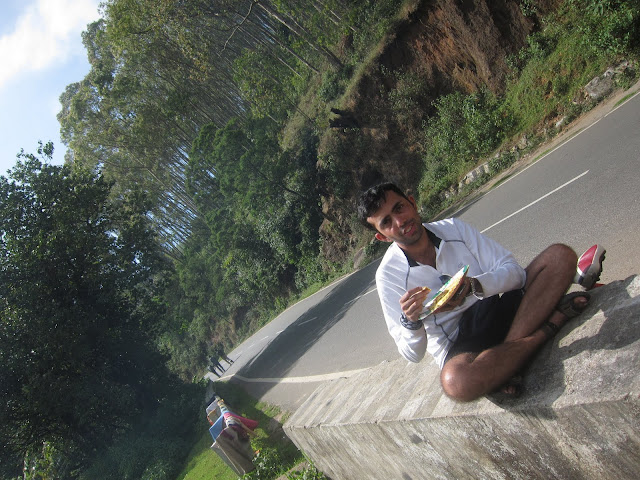 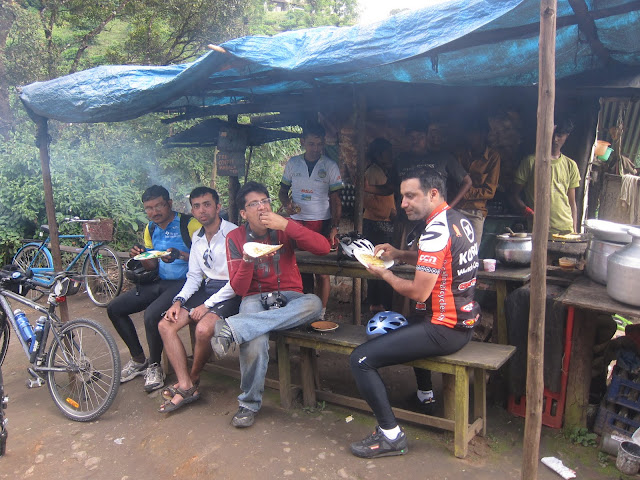 Needless to say, we only needed water at SS3!

The ride after that was much better as the gradient reduced a bit. Being a slow guy, I had to push myself a bit to keep pace with Sameer! But we never did push anywhere.

The landscape at T.R bazaar at around 60km mark was awesome and we took a break there to click pics.

Mayank and Venkat Mandela were there busy clicking pics. Sameer and co had gone ahead to the next SS. 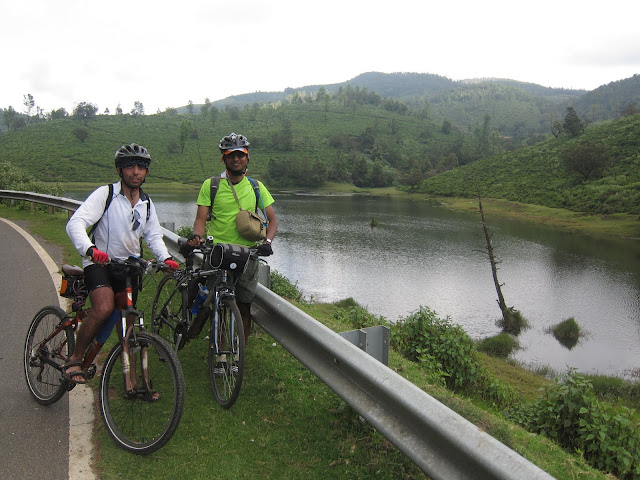 It was getting colder and Sameer wore his fleece jacket. We reached Pykara rather slowly. Having done the additional Vidyodaya visit, we had fallen behind most a bit.

SS4 came at around 4pm. Gladly, we took a hydration break.

Surprise awaited us. Heaven in the form of bajji’s! And spicy chutney! Courtesy, the ever smiling Francis!

After that, we picked up pace. Rode fast with Sameer, Mayank and others.

Thalakundha came! Fingerpost next. Stephen church and then, YWCA!

The 60km-Ooty-climb-monster had been slain! Yay!

What a day it had been! A wonderful visit to Vidyodaya, the egg roll place, a fantastic climb, riding through bamboo forests and then… Ooty, the place where I spent 17 years of my life.

With 435kms done and Ooty monster behind us, the toughest part of TFN was done.

Or so we thought!