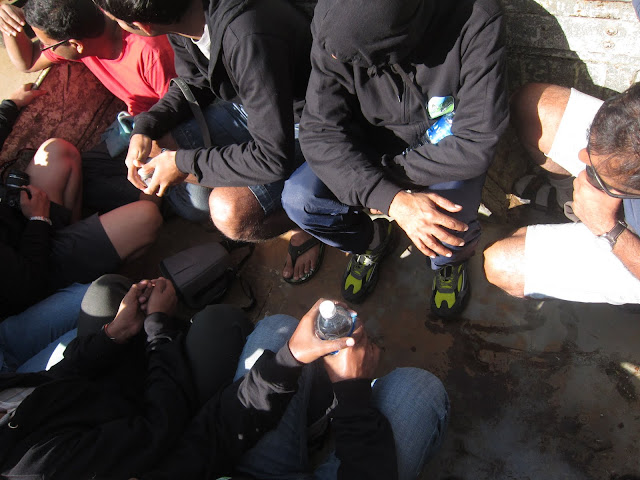 Poof went our plans of standing in an open truck and experiencing the wind in Titanic style!

Disappointed with not being able to stand, 10 of us managed to squeeze and squat into one of the two worn out mini trucks we had hired. In spite of the lack of space, everyone seemed amused!

9 got into the other truck. 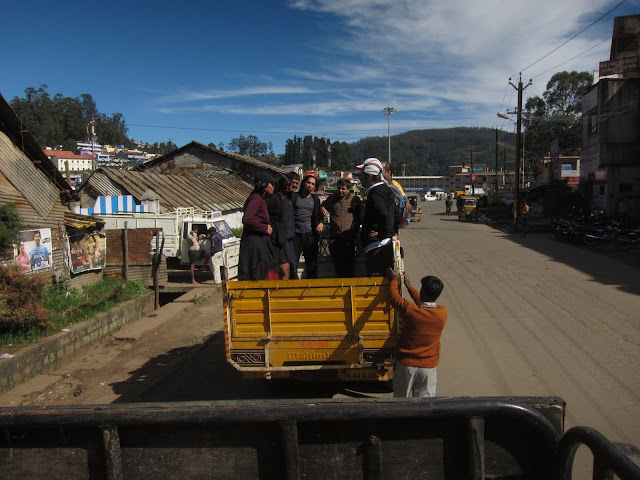 The truck whirred to life. We set out on our ride. 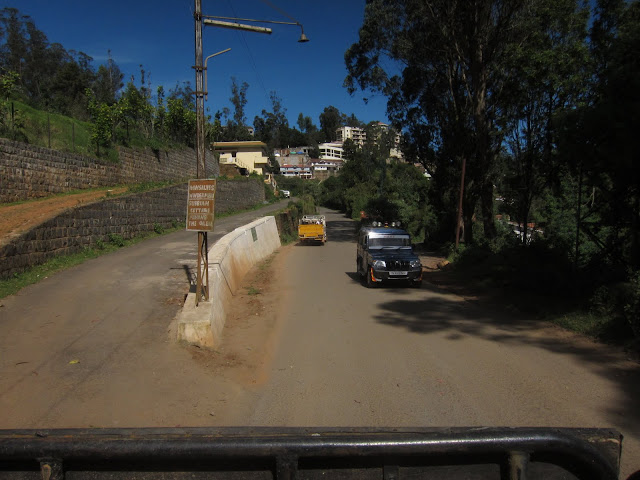 It was an enjoyable rickety ride! The truck stopped at the Pudumund forest gate.

After having pedalled more than 400Kms in 3 days including the killer climb to Ooty, people were in no mood to ride!

It was a rest day.

19 of them chose to go on the forest trek I had proposed.

We had then hired the trucks to take us upto the starting point, the Pudumund forest gate.

It was 11am by the time we reached the forest gate.

Our plan was to trek from the Pudumund forest gate upto Wood house and then to Horticulture farm and finally reach Doddabetta.

It was a pleasant day… perfect for a trek! Everyone seemed excited.

We set out on our trek! 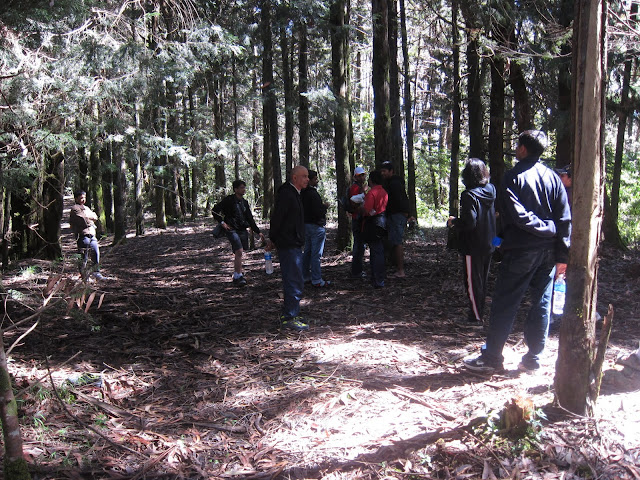 There were Eucalyptus trees everywhere. I took a few Eucalyptus leaves and rubbed into my palm and smelt it… strong smell that cold soothe a headache. As we walked further, the woods became thicker. The leaves on the track indicated that they had seldom been used!

A gentle breeze, zen like atmosphere and the music of trees swaying in the wind, we had a blissful time!

Someone in the gang, I think Shreyas, asked me if I had spotted Malabar Giant Squirrels here. “Not here, but many at the Kalhatty side”, I replied. Barely 10 minutes later, we spotted one!!! At eye level.

The Squirrel was busy with his own business and didn’t seem to mind several cameras clicking at him. We spent almost 10 minutes observing the guy! I only had my pocked camera with maximum focal length being 105mm. This is the best I could click. 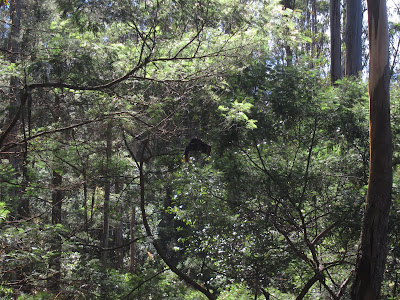 A few minutes later, I heard the call of the Grey headed Canary flycatcher (which I always think is that of the Nilgiri flycatcher). After looking around a bit, we spotted the beauty. Yellowish body and the very distinctive Greyish head. Pic from an earlier trip

We walked through the woods, all the while trying to spot birds, plants and what not. The sound of water flowing through a small stream filled the place. Music for the ears, putting even the purest accoistics to shame!

I wanted this trail to be a surprise to everyone.. but I was surprised myself when Juggi told that he had done this route earlier as part of a recce for a run. He seemed much more knowledgeable of the additional routes which I had not explored until then. 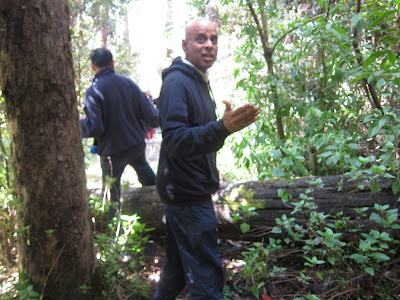 We took a couple of detours, one to the Raj Bhavan view point and another to the Pine forest at the top.

Mayank, with a new camera in hand, went clicking at every single leaf in the forest! And not to mention this mushroom, of which he took a shot from every single angle! 🙂 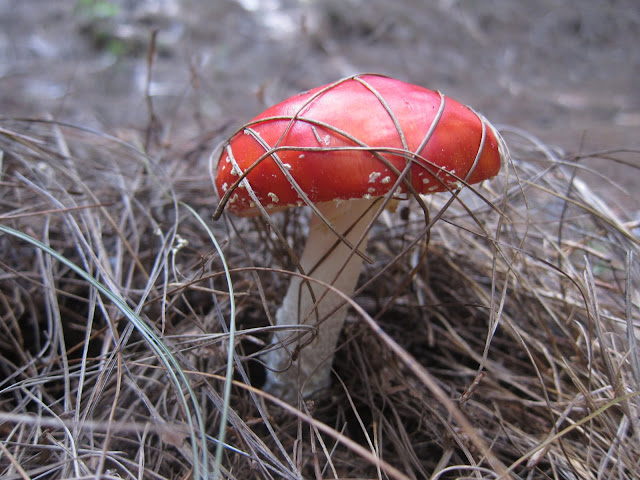 After almost 3 hours of fun, we realized we were too hungry and it was already 1.45pm.

We decided to skip the Doddabetta leg of the trek, touristy as it is, not many were interested too.

We reached the Kotagiri-Doddabetta junction where we had hot tea and biscuits. Then we started enquiring for jeeps to take us back to Charring cross.

If the onward ride was fun, the return ride too was, if not more! This time, we hired jeeps. 10 people and 1 driver squeezed into a claustrophobic space. Sameer seemed the worst affected having to peform a half-standing act all through the ride. But he seemed to be enjoying it. 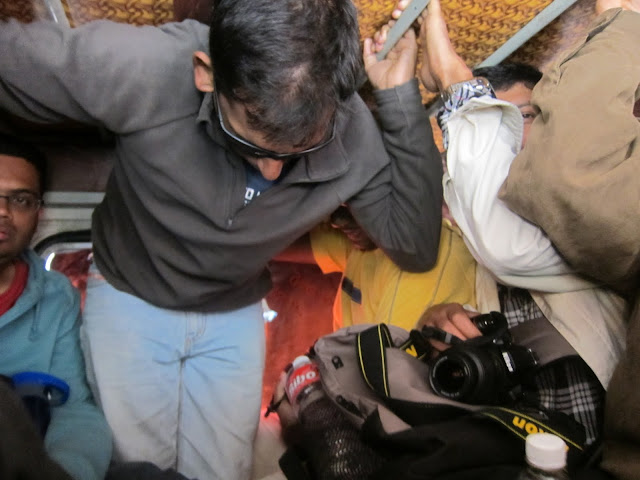 20 minutes later, we were dumped at Charring cross, where everyone quickly checked if all bodily parts were indeed intact.

From there we headed to Kurinji for cheese dosa and chocolates. The service was bad and everyone kept looking at me for having recommended the place highly… at least the roasted cashew chocolate there was good.

Venkat and I went to Higginbothams to check out a few books. I was very surprised when the staff there recognized me… after 11 years!!!

Venkat wanted to go to Stephen’s church. After showing him the directions, I went on my own to meet a friend in a rickshaw.

On the way, there was a traffic jam on the commercial street. 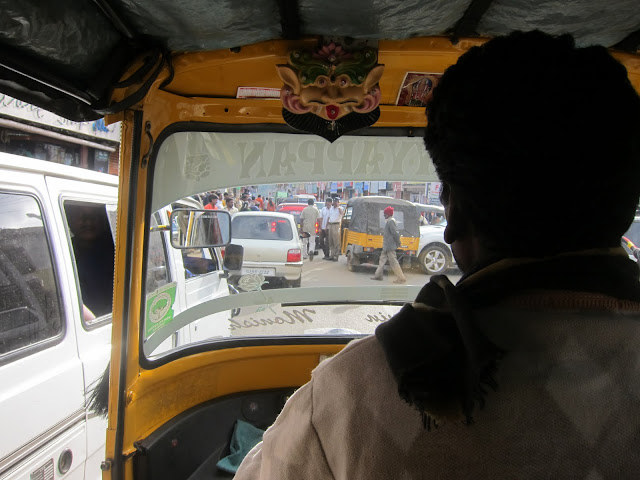 A traffic jam! Something that I had never seen in 17 years of my stay in Ooty, until 1999.

Things are a lot different now!

The road cleared up after traffic cop intervention. I continued on my ride!