‘Younus! How do you think we managed the climb?’

‘Aaarghh! No, you are not supposed to speak like that in our video’, I told our honest guide!

A video for self glorification was being shot at the top of Mt Kinabalu at a height of 13400ft. What the guide just told in front of the camera was not exactly what we wanted the world to know.

So, we stopped the video. ‘Trained’ our guide to say what we wanted him to say.  Words like ‘excellent’, ‘good’, etc were drummed into his head. And the camera started rolling again, this time with better words for our heroic deeds. Over to the video. (I have incorrectly referred to our guide as Yusuf, instead of Younus. He didn’t seem to care which name I used. )

On top of Mt Kinabalu from Prem Sagar on Vimeo.

And then, we spent the next 2 hours shooting pictures! Being on top of Borneo was truly blissful! Clearly one of the highlights of my Borneo trip… after all the effort, pain, masochism… it was truly worth it! Few pictures from the top. Climbing Mt Kinabalu, the highest peak in Malaysia (13400ft), with a 3kg tripod and a 8-10kg backpack, the last leg of it in the dark of the night.

The climb in a few sentences, few pictures and videos.

After our Taxi scare episode, Adarsh and I arrived safely in Kinabalu park at 10pm and stayed at this place called DeVilla. Early in the morning, after a quick breakfast, we confirmed our advance registration for the climb at the Park reception.

Younus, our guide for the climb greeted us with a wide grin! We then took the packed lunch and hopped onto a van to reach the starting point of the climb. Accompanying us were a French couple, whose names I never managed to remember!

Both Adarsh and I were carrying our 3-4 kg tripods and our camera backpacks each weighing at least 8-10 kgs. Little did we know how much we would suffer because of that!

Our plan was to do the entire 8km trek in 2 parts. 6km on day 1, ending at Laban Rata basecamp. Sleep there until 1.30am and begin the rest of the climb at 2.30am (2km) and reach the peak just in time for the sunrise at 6am.  The last 4 Kms were supposed to be really tough to do and only 10% of climbers manage to reach the 8km mark.

By 10am, we  set off with a lot of gusto and cheer. The first 1km was a breeze, though it was steep at a few places.

It was around the 1.5km mark that I felt the heaviness of the backpack and the tripod. The section was steep, rocky and the roughly formed steps took a toll on my knees. 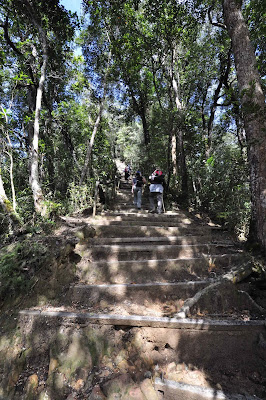 The route too progressively worsened. Rain, steeper terrain, irregular rocks and steps, thinning atmosphere,… and a backpack that seemed to get heavier with every step! Clearly, it was a masochistic climb! 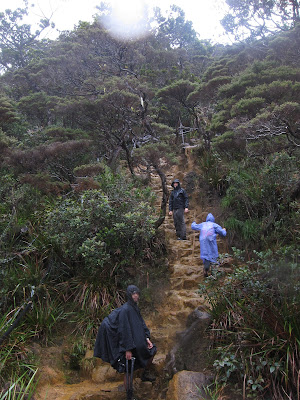 The porters who carried daily needs to the Laban Rata camp were amazing.. carrying 30kgs on their backs and going faster than almost everyone! 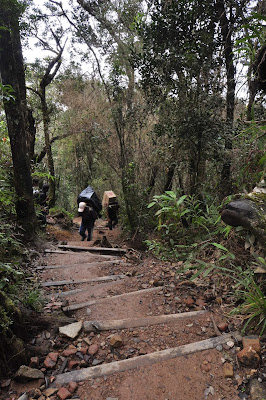 With every passing km, we would heave a sigh of relief. My knees cried all the way to the 2nd Km mark and 3rd and 4th. Here we decided to lunch. An egg, a sandwich, a piece of chicken, an apple,  water and much needed rest!

The time was 1pm. By now, we had a new companion. Heavy rain!

Out came the poncho to the rescue and we continued. In rain, the already difficult climb was even more tougher!

With 2 more km to go for the day, we expected to reach by 3pm. Clearly, we were clueless about the difficult and steep terrain that lay ahead. It was both beautiful and crucifying! Actually ended up taking more than 1.5 hours for every km… as the altitude gain was pretty steep.

Every now and then, we would spot a wonderful Pitcher plant (Nepenthes) or a bird… giving us an excuse to take a longish break. I took some rest after the 5km mark… where I shot this video in which I pretend to look like a professional trekker :-).

Another one after 5.8km mark.

And then…yeah!!!!! Base camp!!! 4.45pm. Pretty bad stats as per my own expectation. But then, I had a heavy tripod and a backpack! So, I guess it was pretty decent. However, I think I would not get hired for speaking in front of the camera anytime for the next 100 years going by this video.

Laban Rata, at last! from Prem Sagar on Vimeo.

This is where we took rest for the night until 2.30am. Laban Rata. 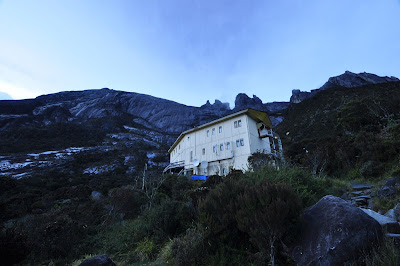 Resuming ascent at 2.30am in the morning! from Prem Sagar on Vimeo.

It was dark and steep! And I still had my tripod and most of my backpack (a few of the contents, I had kept at Laban Rata).

Dark and steep! from Prem Sagar on Vimeo.

And it only got steeper! And the atmosphere got thinner. Every 10 steps, I had to stop and take rest!

Ascent in the dark from Prem Sagar on Vimeo.

Too tired and preoccupied with the climb, I didn’t click many pictures. Once in a while, I shot a picture here or there. Like this one at 5am, the Donkey ears peak in moonlight. When we reached almost the top, it was 6am and was there just before sunrise.

I said almost the top because we never climbed the technical top, the Lowe’s peak. We reached around 4070m and it was just about time for the sunrise. We either had an option to climb to the top spending another 20 minutes (remember, we are talking of steep terrain in thin atmosphere) or we could spend the same on photography. We decided to spend it on photography.

We clicked quite a bit.. took a video (go to the first paragraph 🙂 )… At this altitude, spending more than 30 minutes can make you feel nauseated… before we knew, we had spent 2 hours there. Lingering much longer at that height, the thin atmosphere effects of headache and giddiness started showing their effect on me (not much, just a bit).  Climbing again after that certainly didn’t look like a good idea.

We decided to descend.. not before having spent a good two hours at the top.

Descent was initially fun. I came across this section and was totally surprised that we had climbed up this steep section at 4am in the night with just the torch light for assistance. In the dark, we didn’t know what exactly lay to the other side and had never bothered about it.. now in daylight, I could see what lay to the other side. Nothing! A fall would send you packing half 200m down! The descent turned out to be as tough as the ascent! It took a heavy toll on my knees. To the point that my knees felt lifeless. The large sized steps weren’t any help at all.

The last few steps I took to reach Timphon gate were the most crucifying. I limped and dragged my way to the Timphon gate… the time was 2.10am! Adarsh too joined me after some time.

We got our certificates. The honest guide had indicated his remark. Climb of 4070m (and not the full hog of 4095m).

Adarsh had to return to India and left to Kota Kinabalu airport.

I spent the rest of the day at the dorm in DeVilla. Took a not-so-hot shower and a not-so-good Nasi Goreng for dinner.

And everytime I asked myself  ‘Should I have climbed the last 20 metres too for the Lowe’s peak (4095m) certificate?’, the answer was ‘No, spending the time on photography during the sunrise was definitely worth more than the additional 25m in the certificate’.

And I slept peacefully that night.