Cycling in Neilgherries (old British spelling for Nilgiris) is fun.

The hills and curvy roads amidst lush green landscapes is so much fun for cycling… throw in a blanket of fog and rain, you have an even more interesting setup.

I had travelled to Nilgiris in Sept (18-26). This post is about my cycling experience there.

The initial plan was to cycle at least 300Km in Nilgiris, but I fell awfully short of it and cycled just 103 Kms in all those days. Since I was there for birding, photography and a ton of other things, I could manage only 4 rides.

I have marked few cycling trails in the map below. Of these, Havelock trail is cycling trail 1 in map. Wood house is cycling trail 2. Due to restrictions in showing these, I had to draw lines sometimes. Will find a better way to show the route.
View My favorite locns and routes in Nilgiris in a larger map

On 18th, I started @ 6.30am from Bangalore and reached Ooty pretty late @ 3pm owing to my multiple stop overs for birding.  Unpacked cycle quickly and headed out for my first cycling ride in Nilgiris. Boy! I was excited.

Havelock road is an abandoned road which is slowly disappearing away into oblivion. Post the exit of the British community, it is hardly used. I knew that this road connected to St. Stephens church and that was my motive. To hit Stephens church via Havelock.

This trail is a decent climb through thickly wooded forest, on pebbled and disappearing roads, into isolated and dark stretches amidst giant trees that seem to grow to the sky. At places, you can see moss growing in the middle of the road indicating its infrequent usage. Cycling through this isolated area was scary especially as I was cycling alone and it was already dark by the time I started. It looked like it might rain, but I was prepared. Had a poncho to cover myself and a dry sack for my camera bag containing the Nikon D90. 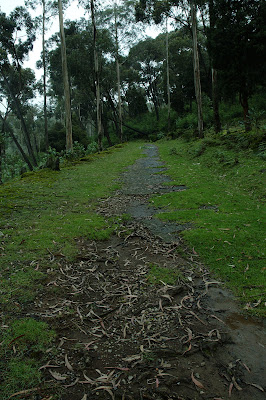 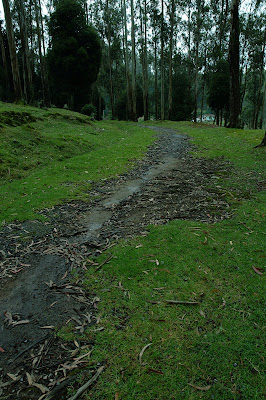 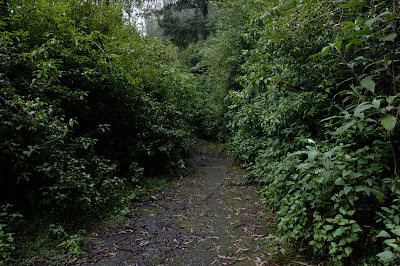 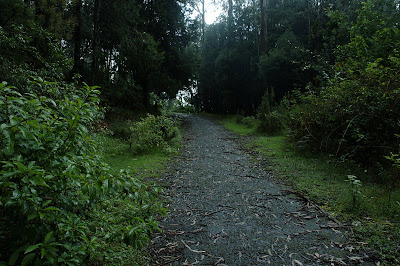 Initially, it was pretty easy. But at the beginning of Havelock road, the road became steep. The poor roads only made it difficult to stay on the saddle. Adding to it, it started raining. I put the camera bag into the dry sack, tied it to the carrier and continued. A few Kms into my ride, the sack started sliding down and didn’t sit neatly on my carrier at all. Annoyingly, I had to stop often to put it back in place. By now, I had come into deep forest growth and the place was very calm except for the sounds of the forest and that of the rain.

The route was pretty easy without diversions, except at a deserted junction, where I was confused as to which road to take. I just took the one that looked right (indeed I was). At a few places inside the forest trail, the trees are so tall and growth is so thick that you see very little light. Not being the bold adventurer type, naturally I was a bit scared. But going back was no option. I was clear about it.

I just kept pedalling until I reached a deserted gate… that of Nawanagar palace! I heard a Nilgiri Laughing thrush there, but was in no mood for birding though. Stopped there, took a few shots of the place and packed my dry sack again. Pedal! 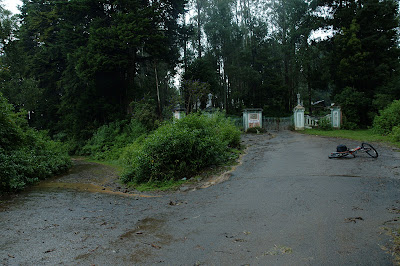 After a Km or so, I saw the first human being and I felt relieved. Thereafter, it was cool. All downhill through rain and cool weather. Merit Inn came first. Then, Stephen’s Church where I stopped to get a few shots.

Woodside school came later and the area has a bus stop and is crowded. The road deviates here and I took the upper one that leads to Tamizhagam. A nice beautiful stretch. Low traffic, good roads, lot of greenery. I reached home and saw the speedo. Only 8 Kms!! But I felt like I had pedalled atleast 25 Kms. I took more than 1 hour for this ride, but I thoroughly enjoyed it!

I was tired by now, after having driven for 274 Km’s earlier and having cycled in the rain. I was done for the day!

Note: The snaps of this ride are sitting on my backup camera’s internal memory. Without the proprietary cable, I am unable to retrieve it. Will have to do without snaps for this one. Sorry!

Woodhouse is an old British structure that is in dilapidated condition in the middle of a forest somewhere after Pudumund and just above Raj Bhavan. This once popular British structure is long since forgotten.

The regular route to Doddabetta is via Kodapmund. As kids (I grew up in Ooty), we had speculated an alternative route that went via Woodhouse to Doddabetta. But none of us were bold enough to cycle into the thick forest regions of woodhouse to find if it ever led to Doddabetta or not. But today, with the help of Google maps and stuff, it is easier to make out that Stephen church is not too far away from Doddabetta via the Woodhouse.. but the route doesnt show on the map.

The plan was to hit Stephens church and from there, Marlimund lake and go to Doddabetta via Woodhouse. I started pretty late at around 12.30. This time I left my heavy DSLR and bag behind after the experience from the Havelock ride. I reached Stephen’s church first which was around 3.4km away. This place had almost become the central point of all my rides. There I realized that my old camera had stopped reading the SD card I had and so, I was left with its 8MB internal memory, or 18 photos of decent quality only. Damn! And adding to my woes, the Kodak camera needs a proprietary cable to retrieve snaps from internal memory. Hence, the 18 snaps of this ride are still in my camera… which explains why I do not have any snaps for this trail. Sorry!

I asked the traffic police and few pedestrians the way to Doddabetta via Woodhouse. None of them knew it and some were confused. They said “you can’t hit Doddabetta via this way”. All pointed me to the regular route. That made me more determined to find this route out.

From there, cycled 3.4 Km to hit the very beautiful Marlimund lake! The lake is like an overhead tank of Ooty and supplies water to a good part of it. You cannot enter the place as it is fenced. (this shot below is from another trip) Took a shot and turned back to reach the Pudumund forest gate (1.2km back). There I asked a few kids the way to Woodhouse. Excitedly they told me the way, but cautioned that it was very bad and steep to cycle. There is a small church there and a slum. You need to go through it. Cheerily I headed in that direction.

A few minutes later I found myself entering the thick woods. A few kids were excited to see a cyclist wearing a helmet and heading into the woods. A few words with them and after a few Five Stars with them, I chugged on. The road disappeared. Moss and pebbles filled my path. The climb became steeper and I found myself breathing hard and heavy. I was onto grannies! Climb, climb, climb.. only one thought in my mind. At some point, I was so exhausted that I had to stop for breath. After some rest, I realized that I was in the middle of nowhere in a forest where no one would know if something happened to me! Boy, it was scary! Deadly silence of the forest! (I guess I was wrong, it is actually not too far away from Raj Bhavan and Horticulture farm… but you can get deceived into thinking that you are deep into the forest).

I hit some junctions too… all roads being deserted with moss growing in the middle of the roads. I took some obvious choices… based on my study of the map and elevation. And it rained. Heavily! I put on my poncho and continued to cycle…cycle..cycle..take rest.. cycle again until I somehow stumbled upon an old deserted building. One quick inspection and I found that I was directly above Raj Bhavan and at the spot called “Raj Bhavan view point”. It had been inaugurated in 2000 and had never been used I guess. I knew I had missed my way for this route was descending and I was supposed to ascend.. and tracked my way back to the nearest junction and took the other way.

By now, I had done some 3.3kms on the forest cilmb and was panting hard. I had taken about half an hour… I think. The rain was only making it harder.. with my spectacles not being helpful. Water was getting stuck on it and vision was impacted. I had to remove it and ride. And the climb was too much for my legs.. I had to get off the cycle and push. Push I did for a short distance and saw a building… I knew immediately that I had done it. For this was the horticulture farm. Yay!

From there, I cycled to the Doddabetta-Kotagiri junction. And then rode up the Doddabetta peak. It was steep. I tried hard and harder… I did well I think to cycle 90% of the climb. 10% I think I pushed for it was too much for me esp without practise. Amidst rain and some pain in my legs, I reached the top of the Doddabetta peak. A few clicks later, I descended! It was a joyous ride.. zero effort. I took the same route back. Via Woodhouse to Stephen church to Fingerpost. At the end of the ride, I had done 27.9 Kms, but it was more like a 50+Km ride on a normal terrain given the steep climbs and poor roads. This I believe was THE BEST RIDE of the trip! I would have liked a 75Km kinda ride, but did not have the time for a real long ride.

I went home pretty satisfied and happy with the ride! Will have to find a way of getting the 18 snaps in it out!

To be continued… Kulishola-Marlimund trail and Coonoor to Masinagudi ride reports next!

UPDATE: I have never gotten around to write the sequel to this.. call it laziness. If you however, need any info, let me know.

You may want to read my other Nilgiris related posts

10 thoughts on “Cycling in Neilgherries”