My plans were simple

But, my planning ended there. I had not thought about transport, food, maps, directions,… blah blah. The minimalistic planning either made for a great trip or screwed things up depending on how you view it. 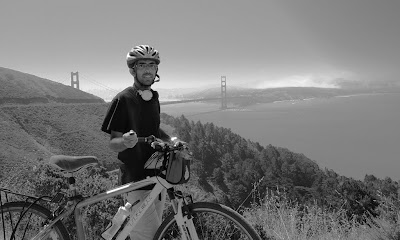 After reaching Embarcardero on Sat noon, I decided to rent a cycle for a day after realizing that public transport to Marin was as scarce as Chicken biriyani in Oakland. Not only that, I now realize how foolish it would have been had I decided to hike the distance! Around 15-18 miles.

I rented the bike from “Bike and roll” at 32$ for 24 hours. I got a 10$ discount as I stayed at the hostel that night. (And at the hostel, I got a 2$ discount because I took a bike. 🙂 ). The bikes are decent and definitely better than those provided by “Blazing saddles” (maybe I will blog about that trip I made on a cycle too).

Cycling from Embarcardero to Golden Gate was fun. The cappucino at the cafe below the bridge was heavenly. Riding across the bridge was fun too, this time the wind being sedate unlike the previous time when it tried to lift you off. Beyond the bridge, its all uphill. That was when I realized my next mistake.

A tripod, 3 lenses, camera, filters, chargers, food, blah blah. And…. I had 12$ in quarters adding to the weight. Yes, you read it right. That’s 48 coins!!! (Blame my desperate hunt for the Tennessee state quarter which will complete my 50 state quarters collection). My camera bag even had a torch… which later on turned to be a godsend. The weight on the way up was killing, but my enthusiasm to capture the bridge before dark was strong enough to keep moving.  After a few quick shots at Battery Spencer, I continued onto Conzelman road.

A point on Conzelman road has a very nice view of the Golden Gate. But the road was closed due to construction. However, I took my chance (though a bit scared of being on the wrong side of the law in a lesser known country) and reached the ‘vantage’ point though a board said violators will be fined. Once there, I clicked a lot of pictures, all of them long exposures with shutter speeds from few seconds to even 30. I was not very happy with the results and felt I should have done better. But if you have any plans to go there for night photography, maybe my experience should help you. Lost in the dark

Okay. I got lost in my photographic pursuits and didn’t realize it was 9.20pm. I knew the hostel closed at 10.30pm and I still had plenty of time to reach there. After all, the cycle rental maps showed them to be easy to reach.

It was dark. Pitch dark. So much that even my pretty good cycling torch (see, sometimes carrying all that junk in your bag helps) was not enough and I hardly could make out the edges of the road. I kept cycling and saw a board that read ‘Marin info center / hostel’. Nice.. am on the right path I thought.

A steep downhill kissed by a few sharp curves later, I reached a junction. Left or right? The right seemed obvious as I could see lights at a distance. The time was 9.50. I had no idea how far I had come and where I was. I had no cellphone coverage, adding to my woes. I stopped a car and asked a girl in her mid 20’s for directions. She said I had overshot and had to go all the way up. That was the last thing I wanted to listen to in the middle of the night, at the base of a steep downhill, with a tripod and camera bag on me, with no water and food and no cell coverage. I almost gave up… and thought of going all the way back instead of searching for a hostel in the dark. But thoughts of missing out on the Point Bonita next day was still strong enough to motivate me back on track.

I cycled a bit.. then walked my cycle! Up the hill, puffing and panting!! Only 40mins to go before I could get into the hostel. After a good 15 min push up the hill, I stopped a minute and thought. Hey.. I never saw any lights on the way down. How the heck could a hostel be somewhere up there!!!  I had no sense of distance in the dark and definitely not the altitude. All that appeared in front of me were dark and black shapes that only scared me. I didnt even know how far I had come down. Going up seemed more gamble than going down…. after all I had never seen a single light. Maybe the lady gave me wrong information.

I decided to go downhill again.. and take the left at the junction. Time was 10.20 and nothing in the sight yet. I gave up by then and thought I would cycle for another 15 mins and then return on the same way back to Fisherman’s wharf for the night. What a bummer!

Just then, like a bolt out of the blue, I saw lights. And a board. It said Marin information center. And yes, it also said Youth hostel! Yay!! I cycled hard and fast… just to reach the hostel at exactly 10.33pm. The lady there was at the office closing her door.. and I just made it in time.

What should have been an easy route was made might tough because I had not seen the map properly! Was it bad? Maybe yes, but I did enjoy the experience!! (of course, had I lost my way and returned to SFO, that would have been another story).

The Marin headlands hostel is very nice. Just like the Point Reyes hostel, I enjoyed the stay there. After checking in and putting my cycle into the basement and locking it up, I had a late night hot shower. The kitchen was closed by then and I couldn’t make myself some cofffee. This time, there were very few people in the 80 bed hostel. I retired for the day.

At 24$ for the night, clean bed and sheets, hot shower, access to the kitchen, like-minded crowd….. the stay is unmatched elsewhere! If you are a budget traveler, Hostels International is the place to stay at!!! Period!

I woke up at 5am and by 5.15 was out heading towards Point Bonita. It was a mile away. I clicked a few shots of the sunrise. It wasn’t that impressive as I had hoped it to be and the lighthouse is closed for public until 12 as the place is a sensitive area for harbor seals resting early in the morning. I shot the Pacific ocean instead. I shot a few clicks of the seals, enjoyed myself in the beauty of the location and hit a conversation with the lone gentleman there. 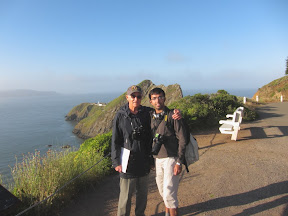 Mr Dick Lingelser, who was a volunteer for the national park and doing his daily counting of the seals. He was a very warm person to speak with and I enjoyed his brief company and his information on the seals of the place. Along with him, I counted the seals too. There were 18 on a small rock, 13 on another, several more on another. He said usually one finds 30-40 there. After a picture, I bid him good bye and started back towards the hostel. 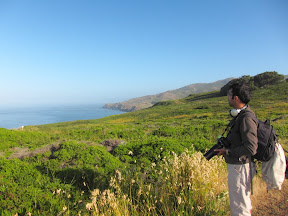 On my way back, I spotted a Mule Deer every now and then. And this unidentified bird too.

Checked out of the hostel, went to the information center to get a checklist of birds of the area and other info, cycled all the way up and then down the hill, reached Golden gate and later Embarcardero, returned the bike.

Ah.. yes. If you rent a bike and happen to stay in the hostels nearby, don’t forget to show your hostel bill to get that 10$ on your bike rental off!