Last week, from May 29-31, Adarsh and I had gone on a camping trip to the Canyon’s of the west – the Grand canyon, Bryce canyon, Monument valley and the Antelope canyon! May 30th was Adarsh’s birthday. 31st was mine. Need I say that I had the best birthday till date!!!

On May 28th night, we flew down to Phoenix from San Jose and then drove to the places mentioned above. Well, we started on a shaky note at Phoenix when the car rental guy told that our already booked Nissan Sentra would be parked at J-8 and that this was the ONLY compact car available there. Upon reaching J-8, we were taken aback to see a totally worn out car with its bumpers and headlights literally falling off!!! We were for a minute unsure whether to take the only car or to cancel it, but decided to do the later. Just then, we noticed that we were looking at the wrong parking slot. The place had 2 numbers for some reason. And both the J-8’s had Nissan Sentra’s. One nice car from the car rental guys.. the other, a torn down car belonging to someone!!! Laughing at our blunder and the strange coincidence, relieved, we jumped in and quickly sped-off! The time was 12.15am on Saturday.

We had plans to visit the North rim of the Grand Canyon, but changed our plans after realizing that the sunrise was around 5.15am (now, I think that was because of the time shift from California to Arizona, need to check it out) and that we would have to drive atleast until 11am. We went to the South rim instead. Though we missed the sunrise there by an hour, the place was very nice. True to its name, grand and massive! We visited the Grand view point and the Moran point. By then the sun was already harsh and we decided to hit the Desert view point and the visitor centre there. The watch tower there was amazing and the views from it equally tantalizing! We then drove to Bryce canyon, a 5 hour journey by car. En route, we stopped by at the Colorado river gorge. There were hardly any visitors, quite perplexingly, at the gorge which I thought was simply superb. I would recommend this place highly! After a 30 min stop here, we resumed our journey.

As we approached Bryce, the first thing we noticed were the hoodoos! Standing like a group of wrinkled yet fair skinned witches, they make an impressive sight. After quickly reaching the National park and securing a campsite for ourselves at the Sunset campground by paying 17$ for the night, we enquired the ranger about the sunset timings. She said “8.40pm”. Our watch read 6.40 and we were relieved. Hey wait, she also said, “1 hour more guys”. Ah, we then realized that we were in Utah. Our time had shifted 1 hour ahead. Damn, we frantically scrambled and gathered our tripods, lenses, filters, etc and rushed to the Sunset point. The place is awe inspiring and jaw dropping to say the least!!! The Hoodoos in all their majesty make an imposing picture. The sun had gone down already casting a shadow on half of the landscape! We clicked a few shots and decided to return back again in the morning!  Back at the camp, setting up a newly purchased tent in the middle of the night (trying not to disturb others as well) was a circus act. We managed to somehow assemble it and slept… though the chill air managed to squeeze in through the umpteen places that were not covered, courtesy our poor assembling of the tent!

The night was completely dark at Bryce. Later, I came to know that this place is one of the very few places where absolute darkness is preserved as a heritage and that astronomers from all over the world turn up here to study the stars. Star gazing is a very popular activity here. We were too tired to gaze at stars that night, though I wish we had.

It was Adarsh’s birthday!! What a place to be in on your birthday!!!

Woke up by around 5am and quickly dismantled the tent and rushed to the sunrise spot. We were just in time! The rest of our stay at Bryce was amazing!! The Millet’s hammer seen in picture below too was pretty nice. The highlight of the place to me was the Inspiration point which was a truly majestic spot with its high altitude view of the Hoodoos that almost look like performers in an amphitheatre (and you the king seated on the top most seat available in the entire vicinity… and looking down upon everybody else… what a feeling!). From an angle, they also looked like the Terracota Chinese army. (After I told this to Adarsh, I overheard another person say the same to someone else 🙂 )

We also drove down to photograph the Utah Prairie dogs. Cute little rodents, for some reason, called a dog! There were a few Pronghorns too, but we didn’t have the time to stop there. Another notable point is the breakfast available at the lodge at Bryce. For 11$, the buffet was excellent.

Later, we were back on the road. Another long drive to Monument valley and we were in Navajo nation reserve territory! We reached the place by around 6pm. We booked a tent site for 27$ at the Gouldings camp. Sunset at Monument valley was beautiful. But having returned from Bryce, our expectations were sky high and I was a tad disappointed to see only a few mittens. After clicking pictures of the mittens and the lonely dancing Navajo Indian, we retired for the day. My birthday was knocking on the doors and my wife and parents wished me a good birthday! I slept well like a log in the tent at Monument valley. 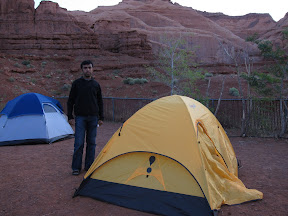 Decided to have a quick breakfast and drive towards Antelope canyon. The photography tour is a must if you visit the place, but these get booked in advance. We decided to try our luck.

It was my birthday. And did I know it was going to be a day full of events!

Bad luck struck us in the form of a police cop who wrote a 105$ fine for speeding!!! Actually we were relieved that the fine was 105 and not the 300+ ones that our friends had warned us of. We drove carefully after that.

Bad luck struck again when I realized that I had shot all the pictures of the previous day in basic mode (3MP). I had clicked a picture of an information board in basic mode after which I forgot to return to raw mode. Damn!!

By 10.30, we were at the place, but every tour operator was fully booked. We were anxious… Luckily, a phone call to a number of the Navajo tour guys gave us a fresh breath of life. They had 2 slots and we needed to be there in 15 minutes. After much difficulty in finding their office, we reached their place just in time!!

The Antelope canyon is simply mind blowing. In all my life, I had never seen anything like this!! A tripod is must here if you intend to click snaps. And yes, a large piece of cloth to cover your equipment from the falling sand too. Jaden was our tour guide and he is a very jovial guy with a good sense of humour (seen in pic below). After a bumpy ride in his truck, he helped us navigate through the narrow confines of the canyon amidst a torrent of people. Everyone anxious to get a masterfully crafted picture of the canyon moved around frantically… though I wondered if the small point and shoots used hand-held would really help anyone in those dark confines. My shutter speeds were well in the range of 1-5 seconds and my newly aquired Gitzo carbon fibre tripod turned out to be a life-saver!!! 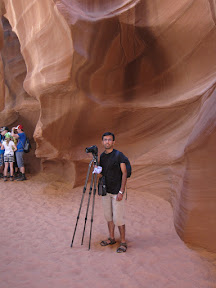 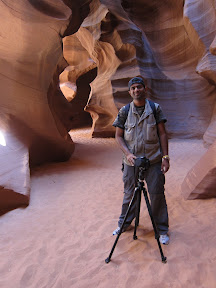 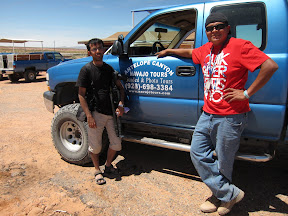 Very happy after having completed the Antelope canyon, we decided to hit the last spot of our trip. The Horseshoe bend! A very nice place in a quaint location, one that is easy to miss too. True to its name, we saw a horseshoe shaped gorge. A few clicks with the polarizer on helped me get decent exposures sans the reflection of the evening sun. After sitting at the spot for a few minutes and soaking in the evening beauty of the place, we set back on our return journey. 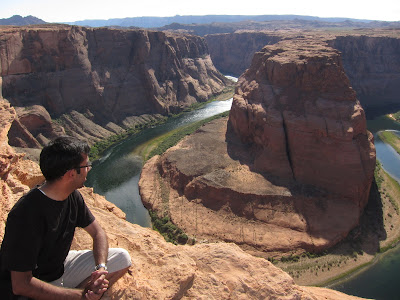 We reached Phoenix by 10.30pm. One helluva trip and 2 guys in birthday mood. We had the time of our lives. Camping in the canyons of the west was pure joy!

3 thoughts on “US diaries-4: Camping in the Canyons”