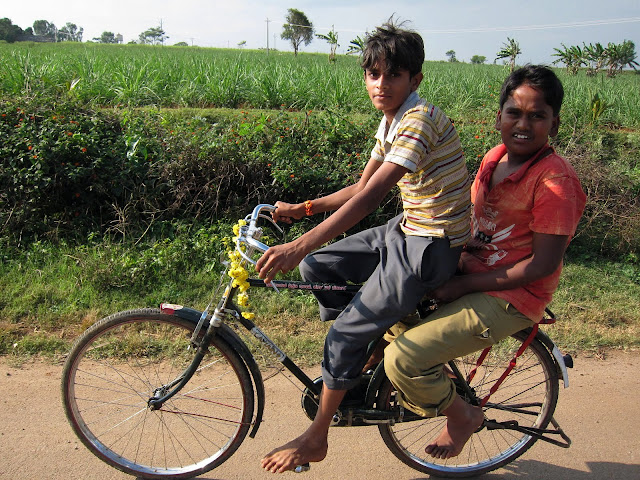 Niranjan and Srinivas, the 2 kids, asked me as they pedalled with me for 2-3 Kms at Vaddagere, 110Kms from Kollegal.

‘Illa, sumne cycling maadthaa idheevi’ (no, we are simply cycling), I told the kids who clearly weren’t pleased with my answer!

The questions continued…. I answered them patiently for a good 10 minutes… after which they seemed to have lost all interest in the boring answers I gave them. They bid me goodbye and turned back!

Tip: Be courteous to kids. They think you are someone special and wave at you. Wave back. Answer their questions. But do not go overboard!

As I watched them disappear into the horizon, I saw myself pedalling a Hero Ranger on the hills of Nilgiris as a kid in the 90s.

Earlier in the day, after a bit of confusion over what the route would be for the day, Santosh had given us a copy of the hand scribbled photocopied route map. 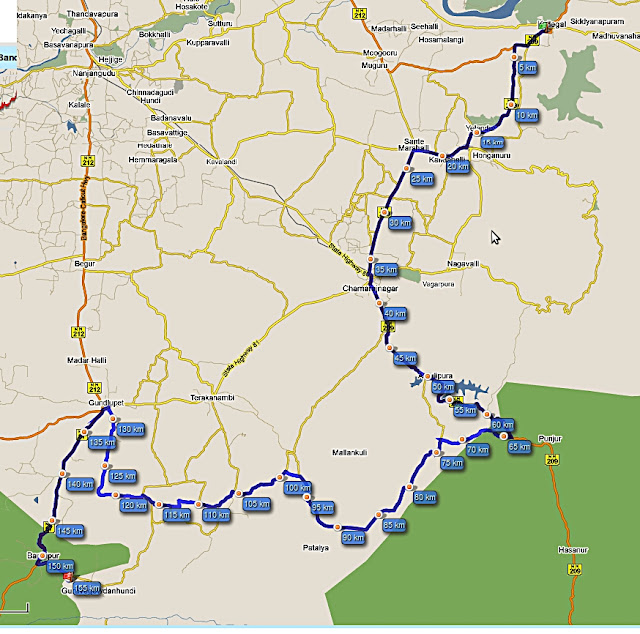 Two days before TFN began, the authorities had declined to let the riders pedal through BR Hills and the tour director and volunteers had to scramble through unfamiliar villages and roads to etch out a good enough route for us at the last minute. I should say… fantastic job guys!!!

The riders had gathered around Santosh for the briefing and were now raring to go!

As we pedalled through the Yariyur and Yelandur villages, entire village gathered around us, standing on both sides of the roads and waving at us. 100 cyclists whizzing through in fancy pancy skin hugging dresses with helmets to match is no common sight!

For once, I felt like a movie star!!! Waving at fans throbbing at you!!! The adrenaline only increased! That is TFN my friends!!!

The riders seemed in good spirit. Navin was pedalling fast. So was Kiran Jonnalagadda. Kiran and I decided to assist each other by taking turns to let the other draft close behind. Shankar too was riding with a lot of gusto inspite of the 180Km ride just a day ago.

I still had my knee pain.

An hour later, realized the reason for my pain. I had adjusted the saddle position just before the tour started. Decided to move it back to the original position.

That seemed to help as I found the pain subside during the day.

SS1 was full of food and fun! The good folks of TFN had arranged for tender coconut for everyone… which everyone thankfully gulped! 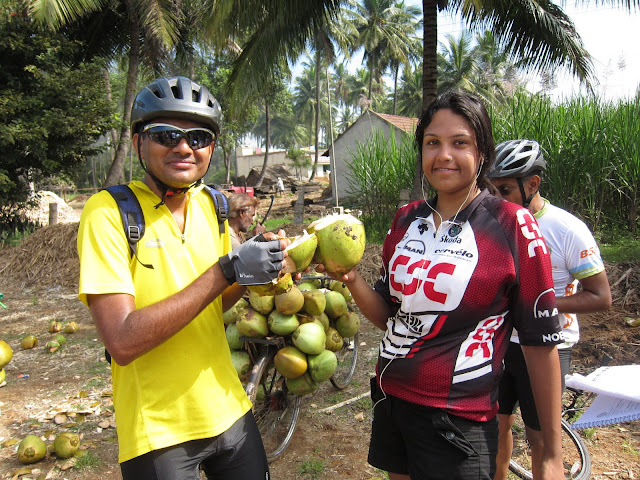 Chiddu arrived in his own style. Munching on a sugar cane shoot!! One hell of a guy, he is! Quick tip: Never get him started on medicine. He will eat you alive with his knowledge of the subject! 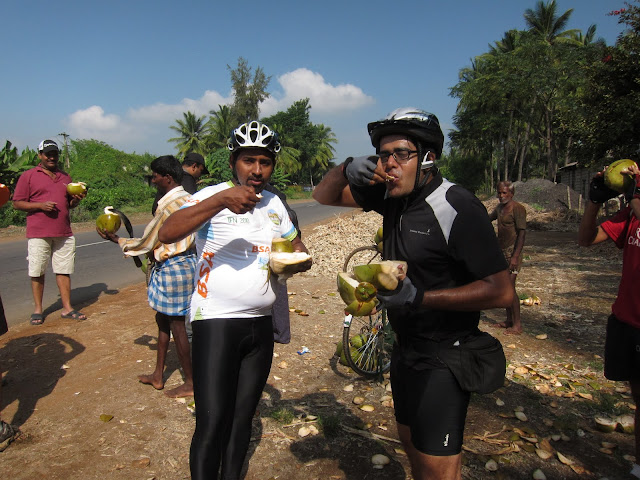 Sameer announced that he would arrange for someone to get fresh jaggery from the nearby jaggery manufacturing unit. And yes, a good volunteer did get it for us and we dug our teeth into some freshy fresh jaggery too! Way too much fun guys, I tell you!!!

Nimbooz, Pulpy Orange, Good day, Enerzal, water, chikki’s and god knows what…. filled the stomach, stacked the pockets and set on the trail once again.

We pedalled for another 25 Kms when Navin interrupted us on his bike. ‘This way guys’, he said! We turned right after thanking him.

The place was just before Gumtapuram near the TamilNadu border. The sun by now was announcing his presence like a first bencher.. hot and humid!

‘Yaanae kaadu thambi’, a passer by warned us! (Elephant territory, guys). Heeding to his advice, Yogesh, Manju, Kiran and I rode together until SS2 where lunch was being served. The guys had set up SS2 near a pond and it looked like an idyllic location to have your lunch at. 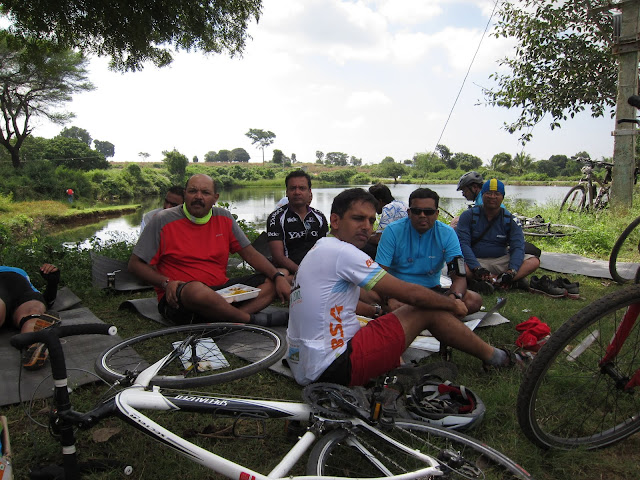 An oh-just-ok biriyani and some rest later, was back on the saddle.

Don’t miss Dr. Raj’s house, someone from the volunteering crowd shouted. I pedalled around 4Kms to find a marking on the road by our marksmen.

Promptly parked the bike and got a few clicks of the place. Nothing really interesting about the place, except that it was here he was kidnapped by the brigand Veerappan a few years back.

(I really wish the brigand had kidnapped Shivrajkumar instead and never had let him out. Fed up of seeing him act in movie after movie every year.. all of them crappy!) 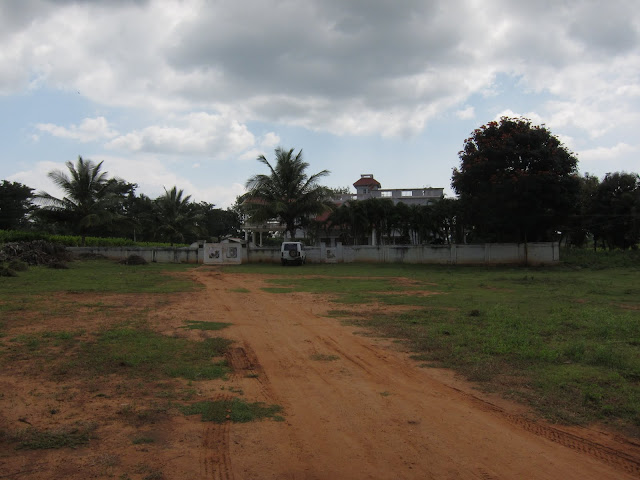 The next 30Kms and the awesome gravel descent:

The next 30 kms were hot and exhausting. Rolling terrain didn’t help much either.

Supreeth was there at stretches. Venkat Mandela gave me company at stretches. This stretch was the most event-less. Just pedalling and watching the Kms go behind. The landscape was pretty much the same. Villages, farms and in between, a bit of forest cover!

Well, just around the 100km mark, just to pull us all out of slumber, there came the gravel path descent. Almost 2 Kms of gravel path, steep and full fodder for MTB’ers like me! We enjoyed it to the hilt and enjoyed it more as the roadies struggled through :-).

The wind hitting the thighs and the face on the steep slope as the wheels thud-thudded through stones and potholes was an exhilarating feeling! Add you don’t have to pedal too!!!

SS3 came at around 100Km mark. After quick refilling of water, enerzal, chikki and stuff, continued on my way. 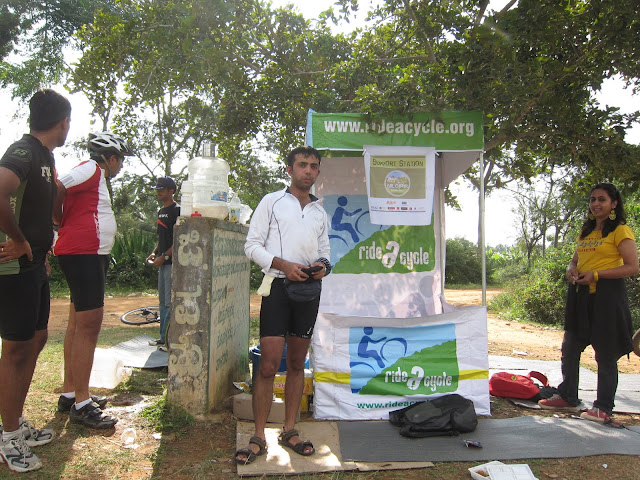 The tea shop at Bommalapura:

At 120kms, found myself cycling alone (yet again) and stopped for tea.

Whew! Was swarmed by a whole bunch of kids! 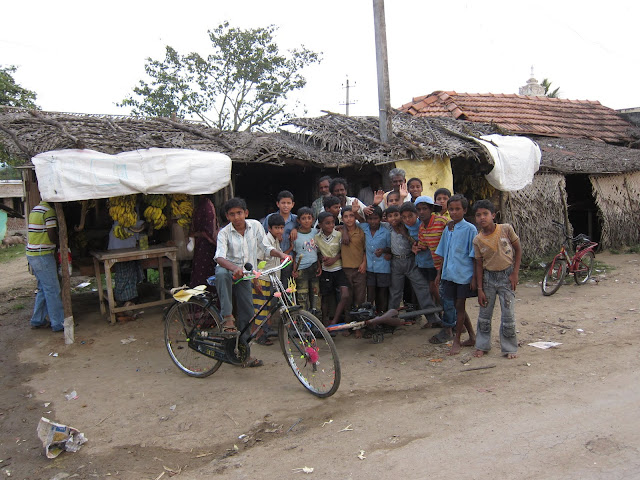 ‘Anna, one round please!’

After escaping from them, continued on my path. Still had 35 kms to go and it was around 5pm. I knew the last 5 Kms involved a climb upto Country club. Given that, I was slightly late!

SS4, Gundlupet and getting late:

SS4 came around roughly 130km mark. Gundlupet was just around the corner. But it was late already. Fear of being swept forced us to pedal faster than our average. There were 3-4 guys who rode with me on this stretch and I seem to have forgotten who they were. Mayank was one I think.

It was getting darker too. As we exited Gundlupet, it was already 5.30pm and we still had 20km to go! The roads turned into a roadie’s delight and appeared as smooth as butter. Pedalling became easier, but the gentle rolling terrain after a long hot day meant that we were still riding slow.

Riding in moonlight through Bandipur forests!!!

The last 10kms were awesome!!!!!!! I rode alone in the moonlight through the Bandipur forests!!! That was like a dream come true! 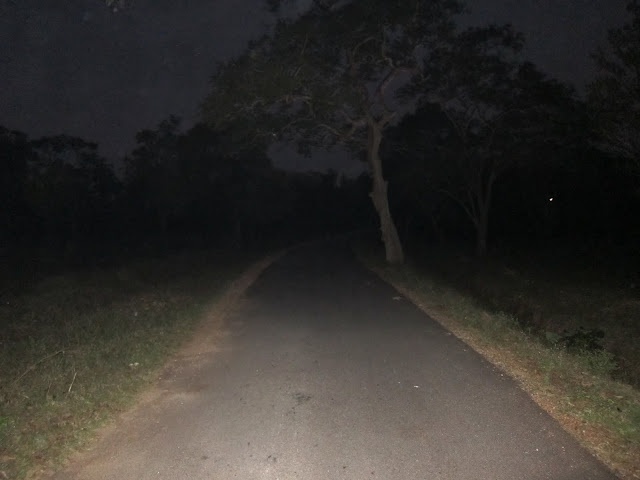 Since most of the guys had gone ahead or were swept by the truck behind, there were only 2-3 guys riding. And quickly we got separated because of our different speeds.

It was dark. I had to turn my torch on.

Tip: Always keep your torch with you. You never know when  you need it. At the same time, if you are not sure of the territory you are riding in, better call it off. Riding in dark in unknown places can be thrilling, but can go terribly wrong too!

A forest jeep screeched to a halt in front of me. An officer got out. ‘Go fast and reach the place soon’, he advised. Pedal fast?? Just when I was having the time of my life riding in moonlight through a forest that I so love!!! No way, I thought… but nodded as if in agreement!

The last few Kms were steep at sections, esp just before Jungle Lodges where there is a long uphill stretch ending with winding roads. In spite of the climb, easily, it was THE moment of TFN for me!

I wanted time to stand still!!! 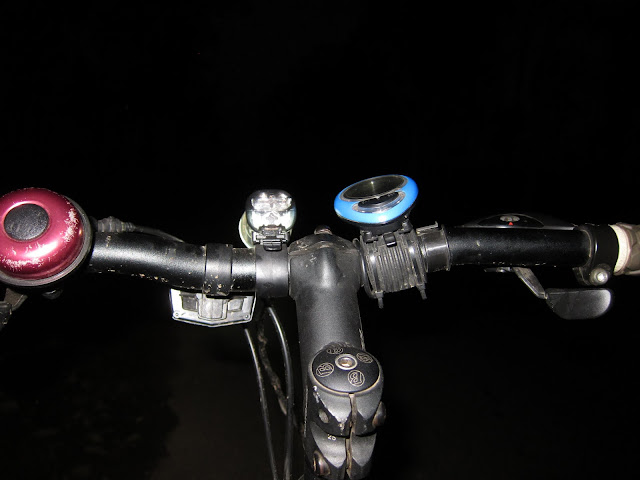 Jungle lodges came! Then the forest gate! Then the board that read 5km to the destination! Wow! I thought, 5kms… easily 20 minutes of additional delight!

I pedalled slow soaking in the joy of the forest.

By the time I reached Country club, it was 6.50pm and I was the penultimate guy to reach!!!

What a fantastic one hour of cycling through the forests!!!

One of the most memorable rides of my life!!

100 cyclists whizzing through in fancy pancy skin hugging dresses with helmets to match is no common sight even in blockbusters!