I had already been awake for an hour or so before that, tossing and turning in bed … anxiously awaiting the moment!

Tip: Better catch your winks a day in advance before any major event!

It was D-Day! Dec 16! Also the longest day of the tour with 180kms to negotiate!

Got up, got ready, checked the bike, had a quick breakfast, bid goodbye to family and hit the road. It was 6am when I reached the Koramangala indoor stadium.

The place was already buzzing with activity… riders, volunteers, administrative team and their families and anticipation, anxiety and a myriad of other emotions on their faces… and the adrenaline flow! 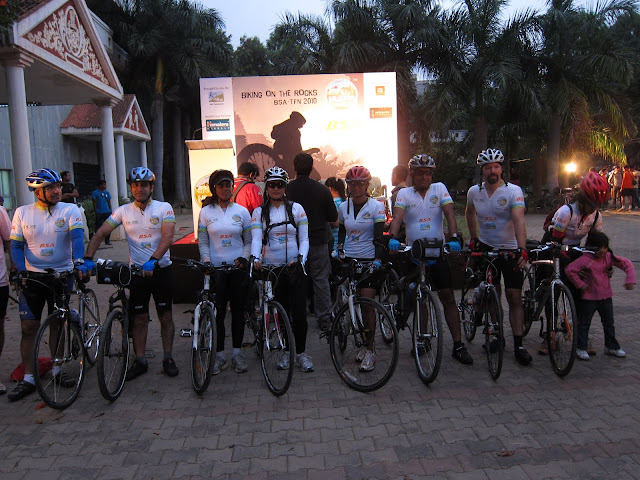 The flag-off : Beginning of a dream

Riders were catching up with names/faces they had seen on email / facebook. The volunteers were busy getting things going, awaiting the chief guests entry, ensuring the riders were comfortable, etc.

Breakfast was being served and I grabbed some kesari, idli-sambar, eggs and tea. And met as many riders and their families I could. 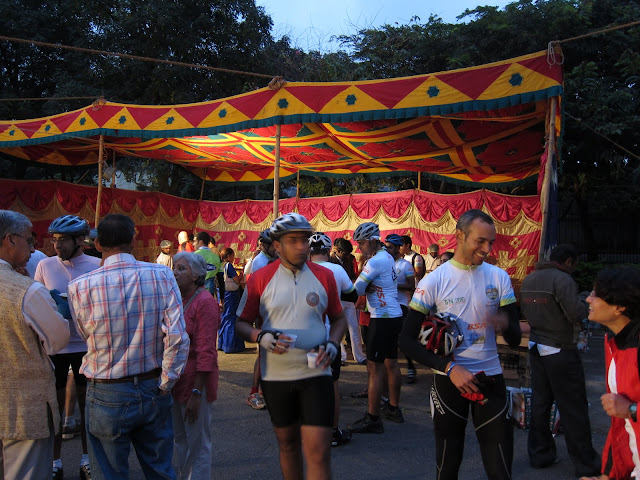 The announcements began! Guests gathered on the stage.

Dr.H. Sudarshan, founder of VGKK and Padmashree awardee, was the chief guest. The others were Dr. M.A.Balasubramanya, CEO of SVYM and Mr. Vinod Menon, AGM of TI Cycles. 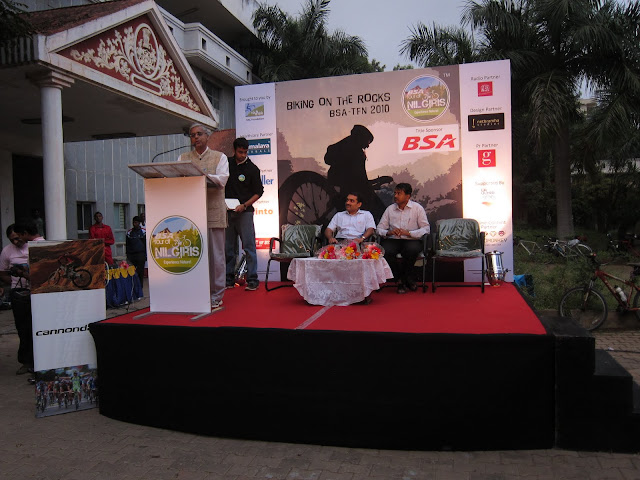 After speeches by the guests and distribution of recycled-cycles to deserving kids, Santosh (Getoffurass), the tour director sprang into action giving us sage advice as to what to do and what not to. A tour briefing and a few clicks later, the tour was declared open by the Chief guest!

The time was around 7.30am. It was the beginning of a dream! 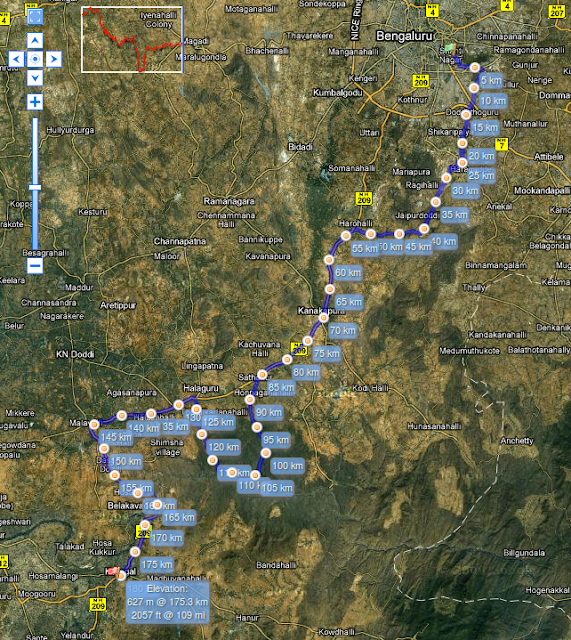 Between 85 and 115Kms, there is a steep descent and then a steep ascent!

As soon as the tour was announced open, the roads were painted white by the TFN jerseyed riders!

It drizzled for a while in the beginning. Calm, cloudy and pleasantly cold, it was fantastic weather to be cycling in!!!

Initially rode for some time with Amit Mukherjee, the Prof from IIT Kanpur. Interesting person as I figured out throughout the tour. After some time, sssss… and his bTwin roadbike had a flat!First flat of the tour! Within 20 minutes of riding. After confirming help was around, rode ahead and joined Shankar Jayaraman, a strong rider on a Trek 4300!

Together we rode. The bad roads after Elec city had slowed down a few roadies and we caught up with them. Soon, we were at Jigani. We had to reach the support station, 85Kms from start, before 11am if we wanted to do the Muthathi loop. So we pedalled faster.

As we passed through Karadikkal elephant corridor, steep downhills enchanted us as we whistled through. TFN was already too much fun!!! And Shankar was excellent company to ride with!

TIP: On steep downhills, feathering (hold-leave-hold-leave) the brakes is a much better idea than to brake suddenly. Also, use both the brakes!

Harohalli came next and Shankar kept going. Realizing that he was slightly faster for my comfort and not wanting to push myself beyond my comfort zone, I slowed down a bit and rode at my own pace.

TIP : On a trip of this length, it is essential that you ride at your own pace. Avoid going faster or slower than your natural average for prolonged distances.

The support station 1 came finally. At 11.20 or so. Took a quick break, refuelled myself and stocked the back pockets/water bottle.

At this point, there were 2 options for the riders.

No prizes for guessing which one I took. Decided to go for the longer loop. I had excellent company in Chiddu, Sameer, Abhinav and Pranav.

We took the left after Sathanur for the loop. The roads were average to bad at places. And descents were steep at places with the edges of the road being sharp, which could cause serious falls if you happened to overshoot the road, esp at the curves.

TIP: Good speed is all about control.  Maintain a speed within which you are fully sure of absolute control over your bike. Beyond that, any speed is bad speed!

The road was blissfully silent and devoid of traffic. The only thing that could be your undoing here is lack of attention or over-speeding on the steep slopes.

Around 7-8Kms later, we were at a spot where we could dip in the Cauvery river. Sameer and I decided to just soak our feet, while Chiddu went full hog, swimming in the river for 10-15 mins, while we cracked jokes on croc’s eating him :-). 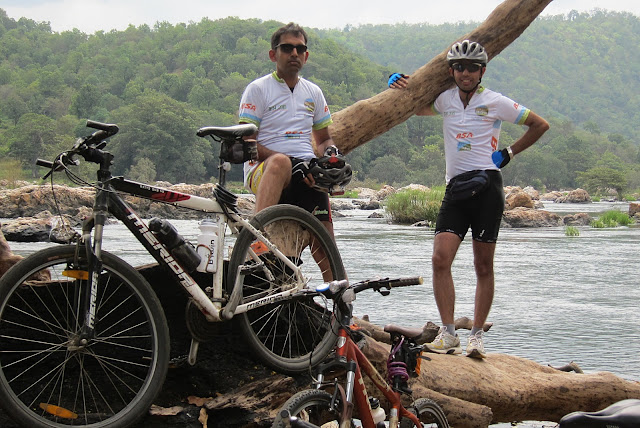 Sameer and I posing at Muthathi

After soaking in the beauty of the Cauvery and sulking at all the garbage thrown around, we decided to hit the tarmac again. A 600feet climb over 6-7Kms awaited us!

The way back was tough. It was very steep at places and did take a lot of effort, esp with the sun not showing any mercy on us. With lunch (and support station) quite a distance away, the energy bar that Pranav offered did help a lot.

Also, there were volunteers on the bike and jeep scouting up and down the route to help riders. Helping them refill bottles with water, giving them biscuits and Orange juice.. these guys were relentless at their job. Thank you guys!

We also came to know from them that there had been quite a few falls, Supreeth, Ram, Rohitash, Boni (had his derailleur knocked off by a biker).. luckily none seriously injured.

As I pedalled up the slopes, my left knee started showing signs of the knee pain I used to have in 2009 (caused by 3 accident injuries on the same knee). As I went higher, it only worsened. I had not felt the pain at all during all of my training. The sudden reappearance of the pain, that too on the first day of the tour was slightly unsettling.

Though I didn’t understand why on Day 1, I realized on day2 that the reason behind the knee pain could have been the adjusted saddle position. I had asked Track & trail mechanic to move my seat a few inches to the front so that the weight on my arms could be reduced. But that apparently backfired and brought back the knee pain.

TIP: Never try anything new just before the tour. Make sure all changes and experiments are done atleast 2-3 weeks in advance and tried and tested out.

As I climbed, the pain worsened and I was forced to depend more on my right leg. This meant I was riding slower than Sameer, Chiddu and the rest of the pack and I fell behind. The pain remained for rest of the day. I managed to reach support station 2 after Halagur only around 3.15pm.

Veg Biriyani awaited us at the SS2. More than the lunch, I needed the break to rest my knees. Many had chosen not to do the Muthathi loop I was told. Ate the Biriyani, rested for a while and continued on my way.

As we passed through villages, kids cheered us, even wanted to shake hands with us, villagers wondered at us and dogs barked at us! The riders responded to all this with a smile and a wave of hand and just continued pedalling!

Snippets from the ride:

After Halagur, for a while I found that I was cycling alone and wanting for company! So I struck small talk with a few villagers who passed by on cycles. Swami was one of them. He gave me excellent company for a 7-8 Km stretch. We spoke about several things, but mostly life in a village vs Bangalore and agriculture. He had cycled from Maddur to Bangalore a few years back. 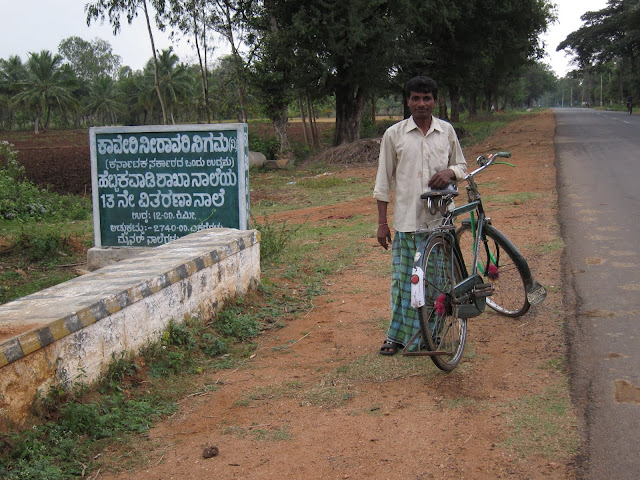 Swami and his friend, the bicycle!

When I asked him for any tips on cycling long distances, he quipped “just need to pedal fast” :-). Took a pic of his and bid him goodbye.

At a teashop, a whole group gathered around me and asked me a gazillion questions and made another gazillion comments. A few are

Are you riding for charity?
Did you really cycle all the way from Bangalore?
Do you put petrol in this cycle?
This is a geared cycle. It is very easy to cycle from Bangalore.
Bere kelsa illa! (No other work to do for these guys!!)
How much did the bike cost?

The last 50 Kms and escaping being swept:

The last 50 Kms weren’t easy. Having done 130 already and in pain, I was pedalling slower than my average. People who were lagging behind were supposed to be picked up by the support truck. Though not exactly lagging behind, I did have some fear of being swept. So I tried to pick up pace wherever I could… only to fall back to average after the pain surged again.

I took a few breaks in between for tea, food and water. Several people gave me company on this leg, but none of them for more than 20 Kms at a stretch. Mayank was there, Dr Krishnaswamy was there at stretches.

By the time I reached the Yatri Nivas at Kollegal, the time was around 6.20pm. I was pretty happy that I had pedalled 190Kms for the day including the ride from home and also glad that I could nurse my knee now.

Checked into the room, took a bath and had lunch with the others. Gayathre was conducting a Yoga session. I didn’t join them, just sat and rested my knees.

Raghavan and Abhinav were my room mates for the day. After some discussion on the day’s experiences, hit the sack by around 10pm and in no time was asleep!

With the longest day conquered, everyone awaited Day 2. Another long day… 155Kms to go! On rolling terrain! Keep watching this space!