Another week went by. Another trip etched into memory!

Mighty mountains that are a geologists wonder , snow capped peaks that glow like an orange ball in the early morning sun, freezing cold lakes that have just begun to come out of their long hibernation by shedding their icy coats, innocently clear water in the lakes that can chill your bones, American black bears that stare straight at you with stone-cold eyes within 500 metres of distance,… Yosemite is a wonder! This time, we avoided the usually visited and much crowded areas in and around Yosemite and went to the Le Vining side which was very beautiful.

Adarsh and I started on Friday night at 11.30 pm from my hotel. When we reached Yosemite, it was 5.20 am. Since our plan was to reach Le Vining before 8am for the bird walk with the park ranger Karen, we decided to quickly photograph the Bridalveil fall in chilling (or killing) cold at the Tunnel view and resume journey.  After a picturesque drive, during which I only kept thinking that I was watching a movie on a huuuuge screen, we reached Le Vining to join more than 15 members on a birding trip.

Birding-walk with the park ranger

Adarsh knew the park ranger there through a common friend. Ranger Karen Anstutz is an amazing person with a wealth of information on all things related to the park and especially, birds, animals and history of the place. The wonderful 3 hour birding walk on snow-clad land opened a wealth of information for us. Chickarees, Clarke’s nutcracker, Bluebirds, Yellow rumped warbler (popularly called the Butter Butt), … Karen knew it all. Their calls, behaviour, nesting season, migratory patterns, …. I was amazed!!! 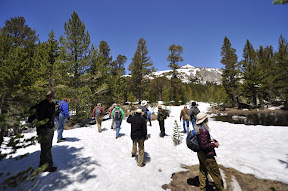 And yes, I have to mention the lovely retired couple who car-pooled us in their car during the bird-walk and dropped us back. They were very sweet and helpful, answering all our questions about the place with patience and going an extra mile in helping us gather more information on the same. I could notice a pleasant romantic chemistry between the duo…

After the bird-walk, we went to the Le Vining information center and later the campground and made a reservation for a site (14$ per night).  After a nap in the noon, we decided to go to Mono lake to photograph the Tufa’s in the evening sun. Tufa‘s are calcium-carbonate formations (limestone) in interesting shapes that have arisen from calcium-rich springs that rise through the carbonate rich lake. As the lake went down in level over the years, these have become exposed above water level. The time there was very well spent trying to capture the Tufa’s in the evening light. The place was full of photographers. A photographer had setup an impressive contraption to capture time-lapse pictures. We struck a conversation with him.  We even met a few Indian shutterbugs there. After a few exchanges and getting to know about a place called Convict lake, we moved on. There was a star-gazing program at the lake-shore in the night at 9.30. We attended the last 10 mins of it, still were very impressed. Andromeda, Poseidon and numerous others. Throughout history, civilazations have looked up at the stars for some reason or the other. But our generation is the worst blessed with our skies being the most polluted with artifical lights, esp in urban areas. Places that help us to view the sky in its original darkness are very few and far between (Bryce canyon is one such place).  And it is our responsibility to preserve the darkness of the sky like any other heritage that we inherited from our fore-fathers. With that note, the program ended with a nice little poem.

Sleeping in the car…  brrrrrr!

We returned to the campground at 11pm. Dinner was skipped as all food joints were shut. Our plan was to start at 4am on the next morning. Given that, and our laziness, we decided not to pitch tent and sleep in the car instead. Saved us time.. but it was teetch chatteringly cccccold! Inspite of all that cold, we did wake up at 4am. And immediately set off towards Convict lake. It was 5.15am when we reached there. Adarsh and I clicked the wonderul scapes there, especially the orange Alpine glow of the peak that happens for a few minutes only when the rising early sun hits the top of the peak. After a few clicks, we resumed our journey.

Breakfast – skipped. We drove to several places in the morning on the way back to Yosemite national park. First stop was at Tioga lake(pic below). Then at Tenaya lake. Toulemne meadows. Then at the Mirror lake near the sunset point. These places were really beautiful, but the windy breeze meant that we wouldn’t get that lovely reflection on the water surface. Duh! As we drove back towards the Yosemite national park entrance, the altitude kept rising. Background only became more impressive with snow capped, curvaceous roads and spine breaking slopes reminiscent of Ladakhi terrain. (That reminds me: Need to plan for it soon).

At one point, there were a couple of cars parked on the road. Curious, we slowed down to check. Boy!!! An America black bear!!! Almost at a 700-800 metre distance. Nothing between the bear and us.. I quickly changed onto my new 70-200 f2.8 and moved in to click the bear. Adarsh with his bazooka 100-400 was already ready.

Whilst the others stayed back at a safe distance, we slowly yet insanely inched towards the bear. At one point, we were hardly 400meters away from the bear and then it began. We were noticed and the bear started staring at us… straight as an arrow as if singularly picking on us. We were clearly startled. We started moving back whilst it just kept staring at us clearly telling us to clear off his / her territory! When we reached the car, we were overjoyed. We were so close to a bear. Foolish.. yes! But a memory etched into eternity in my mind! 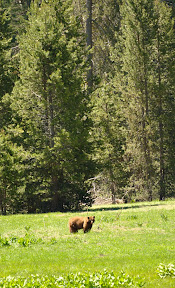 After that, it was the regular touristy stuff. We stopped (or drove through) at a few places like the Omstead point, El Capitan, Yosemite falls, Tunnel view etc for a few ‘regular’ pictures. Regular because this portion of the park is the most visited and the traffic on weekends can go from bad to worse!

Return journey’s are always tiring. We started ours. Giving me good company was Adarsh’s new book: “Within the frame” by David duChemin (my favorite photographer). Loved reading every inch of it. May buy a copy of it myself.

By the time I reached home, it was 6pm. Another memorable trip. And my memory bank richer by few more memories! I have to seriously thank Adarsh Raju for all the driving he has been doing while I doze off in the passenger seat (with a tinge of guilt though). Also, he has given me wonderful company thus far and I should say, almost all the locations were picked by him and the planning was entirely his. I was merely a piggy-backer… the trip would not have happened but for him! Thanks a ton, dude!!

Now, I am still dreaming. Don’t pinch me, pleassse! Let me live my dream!

2 thoughts on “US diaries-6: Yosemighty!”