It had started raining dinosaurs and elephants and the other two boats (carrying European travelers mostly) were returning back. Adarsh and I were in no mood to go back, for we were on the beautiful Kinabatangan river, with no one else to share it with for miles…. in heavy rain!!! What more could you ask for? With the engine turned off, the boat took its own course following the current of the river, drifting like a vagabond with much ado about nothing! We floated and drifted for the next 2 hours! Life was never this beautiful!!!

Rewind a day earlier to Aug 28

After landing at Sandakan airport, I hired a taxi at 35MYR to Uncle Tan’s wildlife adventures head office. The friendly staff there welcomed me warmly and helped me with registration. Adarsh was yet to arrive (he was coming from Danum valley). I settled down for a nice and heavy lunch.

Adarsh came after an hour. After exchanging greetings, we relaxed for some time while Adarsh updated me with details of his wonderful stay at Danum Valley.

The tour briefing came next – by a guy who was new to the job and his nervousness was quite evident. But he did a decent job. “To the bus now”, he said.

I dumped my backpack into the “mini bas” bound to Uncle Tan’s wildlife adventures in the middle of nowhere in the Kinabatangan river valley. An hour later, dumped it into a small boat and sat alongside. That moment onwards, life was real rough, exciting and adventurous for the next 3 days!! By the time we reached Uncle Tan’s, we had already spotted a lot of birds, mammals and reptiles! Water that is chocolate brown in color, open huts in the middle of a forest that have no doors or windows, guides who would be serious ‘misfit’s in our ‘civilized world (?)’ but are absolutely at home in the wild, lots of wildlife, toilets that you share with insects, spiders and other creepy crawlies… and the spirit of adventure. Uncle Tan’s is a place like no other!

WARNING: It is not for the regular Joe with its crude and rough being, no pretence wilderness and lack of luxuries.

We spent 3 days and 2 nights there sweating it out in the wild!

Route and other details: Please refer to http://www.uncletan.com

Okay. A detailed report of our stay with a few pictures now!

After arriving at Uncle Tan’s, having already spotted the Proboscis monkey enroute, we sipped on hot tea before settling down in our huts built on top of stilts. Adarsh spent some time playing football with the guides while I chose to sit idly watching the river. A good dinner and some cheerful songs later, we found ourselves seated with 4 others in a boat at 9 pm in pitch darkness that was pierced often by lights flashing from our torches in search of wildlife.

Our guide was the 20 year old Tong Tong, who with an ever smiling face, captured all our hearts! His ability to spot wildlife in the middle of the night was brilliant. We spotted the Proboscis and Long tailed monkeys, monitor lizards, frogs, Buffy fish Owls, Blue Eared Kingfishers, Black and Red Broadbills, etc and took our own time to photograph them.

The Proboscis monkey was one of our main target species for this trip. We did get a lot of shots of them, but most of them were highly perched. They kept jumping from branch to branch making photography difficulty (esp when shooting from a boat). “There is something there”, shouted Adarsh suddenly. Before we could click, a Civet cat made its way into the bushes. Shooting from a boat in the night was not easy as focusing and lighting posed problems. But then, we had maximum fun!

Back in the camp, lights were turned off at around ~11.30. I decided to take a bath. The bathing area was pitch dark. No shower, just a few drums of water and mugs in the open. The water was chocolate brown in color.  With no one around, suspense of the jungle darkness and just the sound of the jungle to accompany me, I was scared initially.. but settled down later to take a nice bath. Later I slept in peace in the open hut, unmindful of the creepy crawlies all around me! After a quick breakfast, Tong took us on a jungle trek @ 10. It was pretty humid, but then, we liked it that way,… wild! Tong was brilliant and sightings were many. We opened our account in style with a sighting of the Bronze back snake just near our hut.

By now, we had developed a strong friendship with Tong. His knowledge of the forest was amazing. I asked Tong to take us to a spot that showed the canopy from a high location. He readily obliged and we climbed up a mini hill from where we saw the brilliant canopy of the rain forests!

Tong and I viewing the canopy of the rain-forest from an opening from the top of the mini-hill. 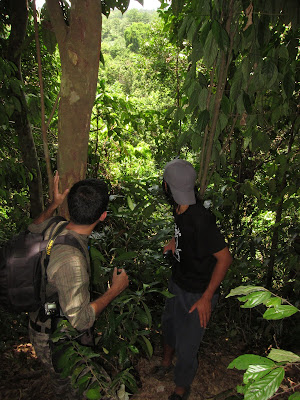 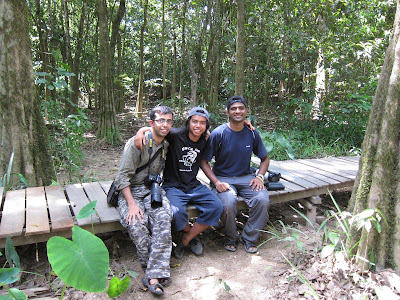 A fantastic lunch and some sleep followed. Then, time for another safari. Tong revved the boats engine and we set off yet again on the Kinabatangan river! What followed was pure bliss. The best boat ride of my life. Rain. Heavy rain. Just Tong, Adarsh and me on the river for as far as the eyes could see. A slow ride unaided by the engine. Drifting and floating amidst lush greenery. Peace!

The evening, we had a lot of fun with the Uncle Tan team singing songs and playing the guitar.

Later, Adarsh and I went out for another trek in the jungle at 9 p.m, this time with Olong. It was one of the best night treks I had ever done. We were also surprised by how close we could go to birds like King fishers in the night. They appeared blind and oblivious to our presence so close to them and we did get a few really close shots of them. In spite of the rain, we spotted and photographed the Dusky Fruit bat, Malaysian Blue flycatcher, Little Spiderhunter, Black hooded Kingfisher, a frog, another unidentified flycatcher, etc.

We were very surprised when we were within 10ft from the Kingfisher and the Spider hunter birds and they sat there like toy-birds. For a minute, I thought they were indeed toy birds, but then they did move clearing my doubt.

The Dusky fruit bat with a fruit in its mouth was one of my best catches! And then, this frog, whose name I haven’t identified yet. A forest cockroach. Borneo has one of the highest population of cockroaches I was told. The Black hooded Kingfisher that didn’t move an inch inspite of us being within 10 feet proximity. The Spider Hunter too, didn’t bother about us at all. Satisfied and thrilled.. we retired for the night amidst the sound of the jungle and the rain hitting the roof of our hut. It didn’t bother me much that I had a huge spider inside my bed creeping on the mosquito net… by now, I had gotten used to insects creeping everywhere :-).

We were sad for it was going to be our last day at Uncle Tan’s. The first 2 days had been magical.  Perhaps the only missing thing was a sighting of the Orangutan. We had not seen any, but then, they sit high in the canopy and seldom come down and keep moving fast from branch to branch. A Orang sighting would be a fitting way to finish the 3 days.

We set out on our last boat safari. The “usual suspects”, namely Proboscis, Long tailed, Grey headed fish eagle, etc were there. Along with them, we spotted a crocodile at close quarters, the Rhinoceros Hornbill flying high amidst the canopy, the White Bellied fish eagle, Wrinkled Hornbill, the Dollar bird, etc. But no Orang yet.

We returned to the base and packed our bags. Bid goodbye to the wonderful guys there. Lan- the manager, Tong Tong and Olong- our guides and the others. On the way back in the boat, we stopped at a few places to spot the “usual suspects”.

And then… someone shouted. “Orangutan!”. Yes, it was an Orangutan perched very high in the tree top. Though it was not a perfect sighting and didn’t get any picture, we did see the Orangutan. What a fitting finish!

An hour of ride on boat and then another hour by the “mini bas”, we were at Uncle Tan’s corporate office having our lunch.

“Mind blowing 3 days so far” – Adarsh told me. I nodded my head in complete agreement, the experiences of the last 3 days lingering like a Proboscis monkey in my head!

PS: I have a ton of photos to process and these are only a few of them. As soon as I get more time, I will add a few more pictures. Please visit my Borneo photo stream to view all of them.