Sitting helplessly in a shady taxi, plying through dark and shady streets in the night, in an unknown city, in a foreign country… I was scared of being mugged / kidnapped!

Earlier in the day, Adarsh and I had flown into Kota Kinabalu, late by 30 minutes due to flight delay.

We had to reach the Mt Kinabalu national park head quarters before nightfall, as we were supposed to start our ascent of Mt Kinabalu, the highest peak in S.E.Asia (13,400 feet), early in the morning next day. We knew little about the place, let alone transport options.The one thing we knew was that it took 1.5 hours in a taxi to the HQ.

After a few enquiries, we decided to go to the Mosque area and take a shared-taxi from there to the HQ. The time was 5.30pm. The taxi from the airport to the mosque area took us 15 minutes and cost us MYR 30.

Upon reaching the place, we were told that the last shared-taxi to Mt Kinabalu had already left! The other option was to hire a private taxi at a cost of 160MYR, which we didn’t want. Like abandoned puppies, we went in all directions and enquired about cheap options to reach Mt Kinabalu. All in vain! Our English was of no use with many locals and with the few it worked, answers were not forthcoming!

Frustrated and anxious, we checked the time. It read 6.15 pm.

Just then, a white taxi screeched to a halt near us! A middle aged man in a white shirt sprang out and walked towards us. He came straight to me and spoke in Malay, apparently, stammering a lot. Stammer or not, I did not understand a word of it.

Unable to comprehend, I took him to a guy nearby who knew English and asked for interpretation. No use! Even this guy didn’t understand a word of it. I tried my luck again with a girl who spoke English. Same result. His stammer was not helping any of us!

The guy then disappeared.

Adarsh and I were discussing options.. anxiously! We had to reach HQ at any cost if we were to start our climb tomorrow.

The same guy reappeared, this time with a small piece of printed paper. Amongst other words, he showed me “Bus terminal”. We then understood what he meant. He would drop us at the bus terminal and we could take the buses from there to the HQ.  Also he seemed to indicate that there were hourly buses at 7,8,9.. so on. God knows to which destination. Somehow a bus terminal sounded like a good idea to me.

I signalled to the guy asking “how much”. He took out 20MYR to indicate cost. I said 10! After much deliberation, he said ok!

Satisfied with my negotiation skills, I convinced Adarsh into it, who didn’t seem too pleased.

I noted down the taxi number and took a quick look at it.  It did concern me that it was not painted like the regular “teksi’s” and didn’t even have ‘teksi’ painted on it but told myself that we were just going to the bus terminal and that it should not matter.

Backpacks in the boot, Adarsh sitting at the back, street after street passing by, …. my fears increased! We had been sitting in the taxi for more than 15 mins. I showed my watch and indicated “how long?”. He showed 5 fingers. 5 mins later, we were still driving,.. seemingly through less populated streets accentuating our fears! The time was 6.50pm and it was dark.

I scanned the dashboard, nothing interesting! The lone ID card hanging from the mirror had faded ages ago and “Bin Jamal” were the only words I could make out.

Thoughts rolled in my head! Perhaps, exaggerated and crazy!

When a 15 mins taxi ride had cost us 30MYR earlier in the day, how could this guy agree to take us on a longer ride for 10MYR?

Why were the local guys unable to understand what he spoke?

Why was there no ‘teksi’ mark on the car?

What if he was a mugger? What if he had a knife or a gun? What should we do? Should I give him a strong kick if he attempted anything? Should I hit him with my heavy camera?

Gravely worried, I thought about how foolishly I had fallen into his trap! My heart was racing!

Just when all hope started flying out of the window… the car screeched to a halt. The board read bus terminal.

Phew!!!! Suddenly, I felt a wave of cool air hit my face! My heart started beating again! I had never been so pleased to see a bus terminal in my life.

Now.. that is not all! The guy not only dropped us, but also took us inside the terminal to the counter that sold Mt Kinabalu tickets! No tickets, the salesman said. Just when we were cursing our luck, this wonderful guy took us to another counter and helped us get the tickets!

Tickets in hand, emotional now, I gave him a hug and thanked him from the bottom of my heart and bid him goodbye! I kept staring at him until I lost him in the crowd.

No.. that was not all. Again, he reappeared. This time with a map of the city which he pushed into my hands like a caring brother! I took it with much gratitude!

I felt like I almost had a new brother!

Bid him goodbye one more time after more hugs! This time, he disappeared truly! Silently, I kept looking at the direction every now and then hoping that he will spring up again. He never did!

I will never forget this guy for a long long long time! Unable to converse, I do not know his name or his whereabouts! I had forgotten his ‘teksi’ number too, my damn memory! The only remembrance is a photo taken from my pocket camera, which I will cherish for long! 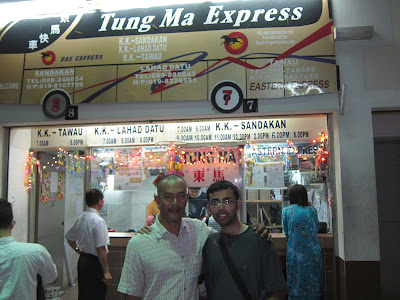 I had a similar experience in the USA when I had to cycle in darkness in an unknown place without a map… searching for a hostel that was about to close in 30 minutes. Read about it here: Merrying in Marin

5 thoughts on “Backpacking in Borneo-4: The teksi scare!”