“Wow! What a beautiful place!!!”, I thought looking through the window of the low flying small sized MA Swings plane. The thought only strengthened when I landed at the Mulu airport – the smallest and the most beautiful of any I had seen!!! Once inside the airport, Adarsh and I looked for the conveyor belt to pick our baggage… only to find a large table on which all our bags had been thrown. No conveyor belt! From that moment on, Mulu was full of pleasant surprises for the next 3 days!

Tucked away in the distant rain forests of Borneo, wrapped by mountains all around with the Pinnacles standing guard, peppered by rivulets, gifted with the World’s biggest caves and canopies that house a wide variety of wildlife and of course, that brilliant canopy walk-way (longest in the world), Mulu is a jaw-dropping place! Easily, one of the most diverse and the most beautiful places on Earth!!!

If you were to celebrate a birthday for the rocks of Mulu, the cake should be large enough to accommodate anywhere between 40-90 million candles!!! No wonder it is a UNESCO heritage site.

At the Gunung Mulu national park office, after a rickety taxi ride from the airport, we claimed our booking. We also enrolled for a few activities – cave exploration, a night trek and a canopy walk! (Unfortunately due to time constraints, we couldn’t do the Pinnacles trek). The next 3 days were blissful! The itinerary below.

The caves of Mulu are the biggest and the best you would ever see! There are many and each is so different from the other and is an altogether different experience.

We joined Jenny, our guide for the exploration trek at 2pm. We walked on a trail, the path of which had been laid with wooden planks. (Infact, this is true for all trails throughout the park.. not a fan of such wooden trails.) We reached the bat observatory in 45 mins. The picture of the mountains containing the caves seen below was shot from the observatory. Our exploration started with the Langs cave. Langs is small and claustrophobic, but has amazing formations of stalactites and stalagmites. Owing to its small size, its stalactites are within reach almost throughout the cave and the swiftlets nests and bat nests (the small holes in the ceiling) are relatively easier to notice. (Jenny is pointing out one such nest in pic below). Photography inside caves was very tough… owing to almost non-existent light and usage of a single mounted flash didn’t do justice to the cave’s innate beauty.

The next cave was Deer’s. Unlike Langs, everything about Deers is big and on a scale, people inside the cave look like mere ants! (See pic below). Large, cavernous and containing the largest cave passage in the world, another very important reason for its popularity is that it also is home to 3 million bats! And the entrance is popular for its Abraham Lincoln profile. Do you see Abe below? 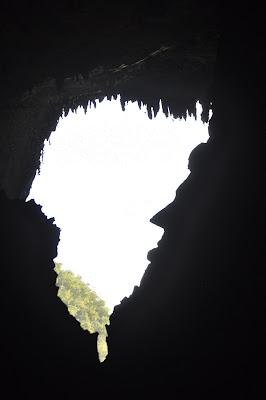 After an hour and a round-trip of amazement inside the cave, we stopped by at the entrance for a special performance by distinguished artists!

The exodus of 3 million bats flying out of the cave in a ribbon like formation (to avoid predator birds), batch by batch, each led by a batch leader. Whats amazing is how these numerous bats fly in groups of several hundreds with the strict discipline of a monk… using echolocation. 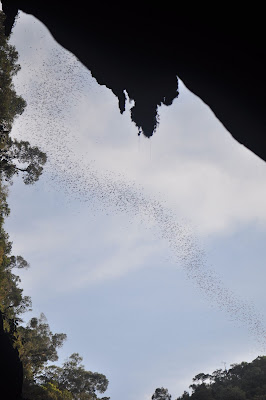 For the next 15 minutes, we spent our time watching the bats fly out! Ah… life’s little pleasures! Then we went back to the bat observatory and sat there soaking in the beauty of the place… keeping an eye on the last few batches of bats flying out.

That night, in the Cafe Mulu library, we read a bit about the rainforests and their importance in our ecosystem. My respect for these places grew manyfold.

The next morning, at 6.30am, we did a bit of birding at the tower, but the tower didn’t extend above the canopy and there weren’t many ‘food’ trees nearby and hence.. not too many birds were spotted. We returned early and had our breakfast at the Mulu cafe.

We got into a boat at 9.30am for the 2nd cave exploration and headed towards the Winds cave, with a short visit to the local Iban community on the way. Typical Iban houses in this neighbourhood. We reached Winds a round 10.30am. It’s whitish Moonmilk limestone formations and the grandiose Kings chamber were mindblowing. At a certain claustrophobic point the cave becomes small and as you pass beyond, you feel a cool wave of air hits you.. probably that is where it gets its name from. This cave is so different in its rock formations from the others and is also cooler than the rest. And another short boat ride later, we reached Clearwater cave. For the next 1 hour, we wandered through in wild amazement… at this most beautiful cave that is believed to be amongst the longest interconnected cave systems in the world. Water flowed gently inside the cave and we crossed the bridge over it to go to the other side. Shaped by millions of years of water flow, the cave is still being worked upon by the gentle duo of water and time. Clearwater is my favorite of the fantastic four! Thoroughly satisfied and feeling happy that every single expense of the trip had been well worth it, we reached the HQ after another boat ride. The caves of Mulu had been an experience beyond words! We happily thanked Jenny and proceeded for a well deserved lunch

The hike was supposed to start at 7pm, but it rained interrupting our plans. Jenny told us that we would go only if the rain subsided. After a good 30 min wait, it did.

The walk lasted for 2 hours in pitch darkness except for our torch lights. We spotted quite a few frogs, geckos, stick insects, spiders, giant ants, cicadas, lantern bug, noodle worm (?) and the carnivores plant – Nepenthes (pitcher plant) in the dark. I was getting hooked to macro photography with every passing day!

Here are a few pictures from the walk. Well, I had walked on Canopy walkways in Canada and even in Ooty. They had not been longer than 100 metres. So, while paying 35 MYR for this canopy walkway, I had wondered if we had frittered money from our tightly budgeted pockets.

The walk had started at 7am from the HQ and we had taken 15 minutes to reach the base of the tree from whose canopy the walk started. The minute I set my first foot on the Canopy walkway… all those thoughts vanished! Only one word came to my mind – brilliant!

We enjoyed being on the walkway so much that I now think the canopy walk is a must for anyone visiting the park.

I took a short video there and instead of ‘reading’ my rants, I now have to sentence you to ‘hearing’ them. Over to the video.

After the walk, we went back to the HQ and had a good breakfast. At 10.30am, we checked out of the room and placed our bags in the storage room and went on a trail to take pictures of the Nepenthes.

Well, it was the same trail we had done on our previous days night walk. Just towards the end of the route was a location where the carnivore plant – Nepenthes grew solitarily. Adarsh and I took quite a bit of time there and clicked a lot of shots. After almost an hour, we returned to the HQ where we spotted this wonderful lizard. Then the rickety ride in the worn down taxi, the beautiful airport, the small plane, the view from inside the plane during flight,… dozing off… the airhostess waking me up and offering a soft drink… looking outside the windows in search of the Mt Kinabalu just before landing at Kota Kinabalu… pinch me back to reality!

One thought on “Backpacking in Borneo-5: Cave & canopy magic”